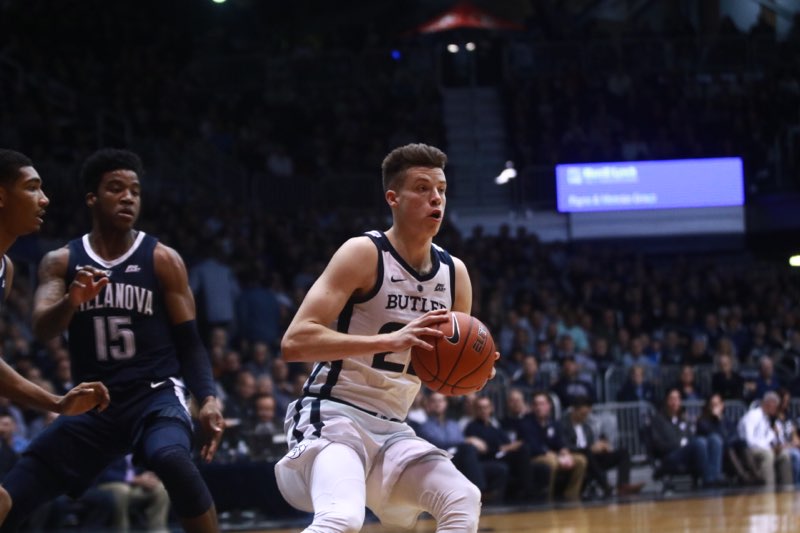 Sean McDermott attempts a pass in Butler’s 80-72 loss to No. 18 Villanova. Photo by Jimmy Lafakis.

Villanova at Butler has become must-see TV over the last two seasons, and commentary royalty was in the building to call it yet again.

Early on, Butler and Villanova traded threes back and forth and promised a great rest of the game.

And after his heroics in the last few games, Butler fans began to be frustrated with Jordan Tucker’s playing time.

Anytime Tucker isn’t in the game, I think Tucker should be in the game.

While Butler fans are notorious for thinking refs aren’t on their side, this game seemed to be especially questionable.

Missed over the back call and then a charge leads to an easy bucket for Nova. Not the best display from the refs tonight

The Dawgs trailed for the large majority of the game and showed the fight needed for a comeback, but couldn’t get the stops to have a chance.

2H U12: #Butler trailing Villanova, 61-54. Dawgs showing fight on both ends but can’t seem to get over the hump. Hinkle faithful a bit restless after a few recent calls. #GoDawgs

And Paschall and the other bigs were tearing up on Butler’s bigs.

Can the Butler Way start putting an emphasis on rebounding?

While it was cut to four at one point, a Wildcat three point barrage put the game out of reach.

It is plausible that 12-0 run by Villanova decides the game. But #Butler is trying desperately to hang in there.

The comeback always seemed to be luring, but it eventually never came.

Remember the Ohio State game? We should do that

In the end, there weren’t enough one-on-one defenders to compete with Villanova’s stars.

I can’t remember a Butler team with this many guys who were true defensive liabilities. Tough as hell to make a run when 4/5 players on the court can’t guard anyone

One thing that stalled the Butler comeback? Turnovers. After having only one in the first half, the Bulldogs had eight in the second.

How many empty trips have the Bulldogs had tonight where they didn’t even get a shot off?

For a bubble team looking for a signature win to catapult them in the field of 68, Butler fans don’t have to look far for another opportunity. At Creighton on Friday and Vs Marquette next Wednesday.

Tip from CHI Center in Omaha is set for 8:30 pm ET on Friday. #GoDawgs