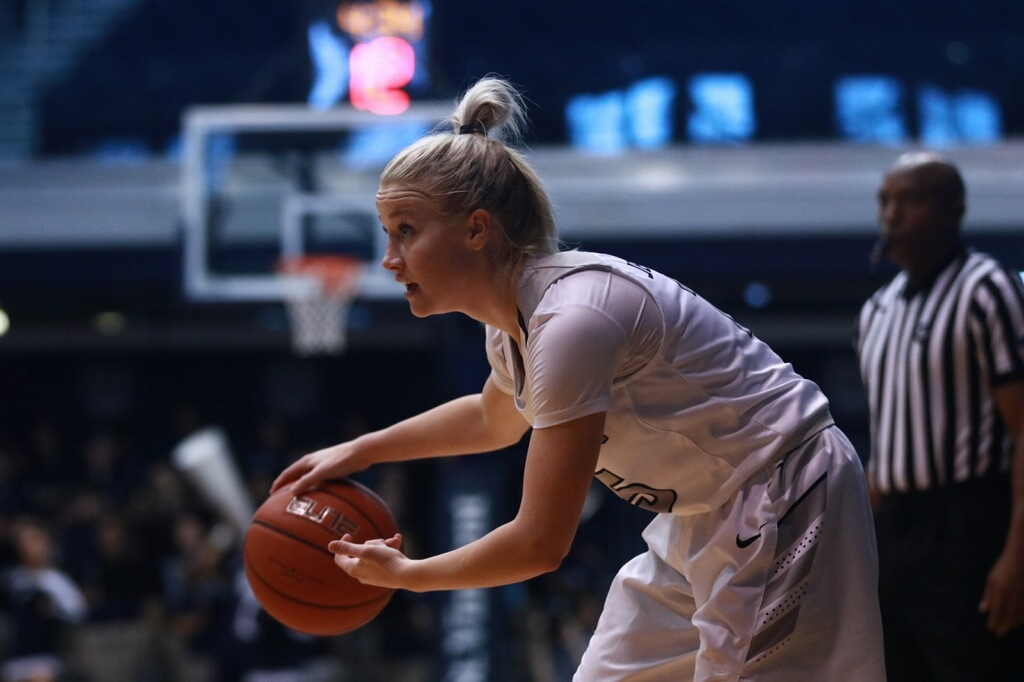 Whitney Jennings looks for an open move during Butler’s 64-47 win over Ball State on Dec. 2. Jennings scored 20 points in the game. Photo by Jimmy Lafakis.

The Butler women’s basketball team toppled its in-state rivals, the Ball State Cardinals, 64-47, on Dec. 2 to improve to 6-0 on the 2018-2019 season. Whitney Jennings scored 20 points while Tori Schickel dropped in 11 points and 12 rebounds.

All six of Jennings’ field goals were 3-point baskets, which was an individual high on the season. Jennings and Michelle Weaver — who contributed another solid all-around performance — knocked in 3-point shots to push a 10-point lead late in the third quarter to 16-points.

On defense, Shickel held forward Oshlynn Brown — who averaged 13 points per game headed into the game — to three points on 1-of-9 shooting. Schickel’s defense was contagious, as the Bulldogs stymied Ball State to only 47 points on 30 percent shooting.

“I loved how focused we were, how we defended each one of their sets,” head coach Kurt Godlevske said. “How we defended their personnel. I thought Tori Schickel was phenomenal on [Oshlynn Brown]. The big thing is we were connected as a group.”

“This year we’ve grown so much defensively. We are doing a better job communicating,” forward Naira Caceres said. “At the end of the game all that matters is that we get the W.”

Maliah Howard-Bass was Ball-State’s only performer who made over four field goals, and kept the Redhawks close until Jennings and Weaver knocked in those back-to-back 3-pointers.

The Bulldogs flipped defense into offense, scoring 21 points off Ball State’s turnovers. Notably, that has been a recurring trend this season, as the Bulldogs have scored at least 20 points off turnovers in each of their games this season.

In their first road test on the short season, the Butler Bulldogs play the Indiana Hoosiers on Dec. 5. The game begins at 7 p.m. in Assembly Hall.