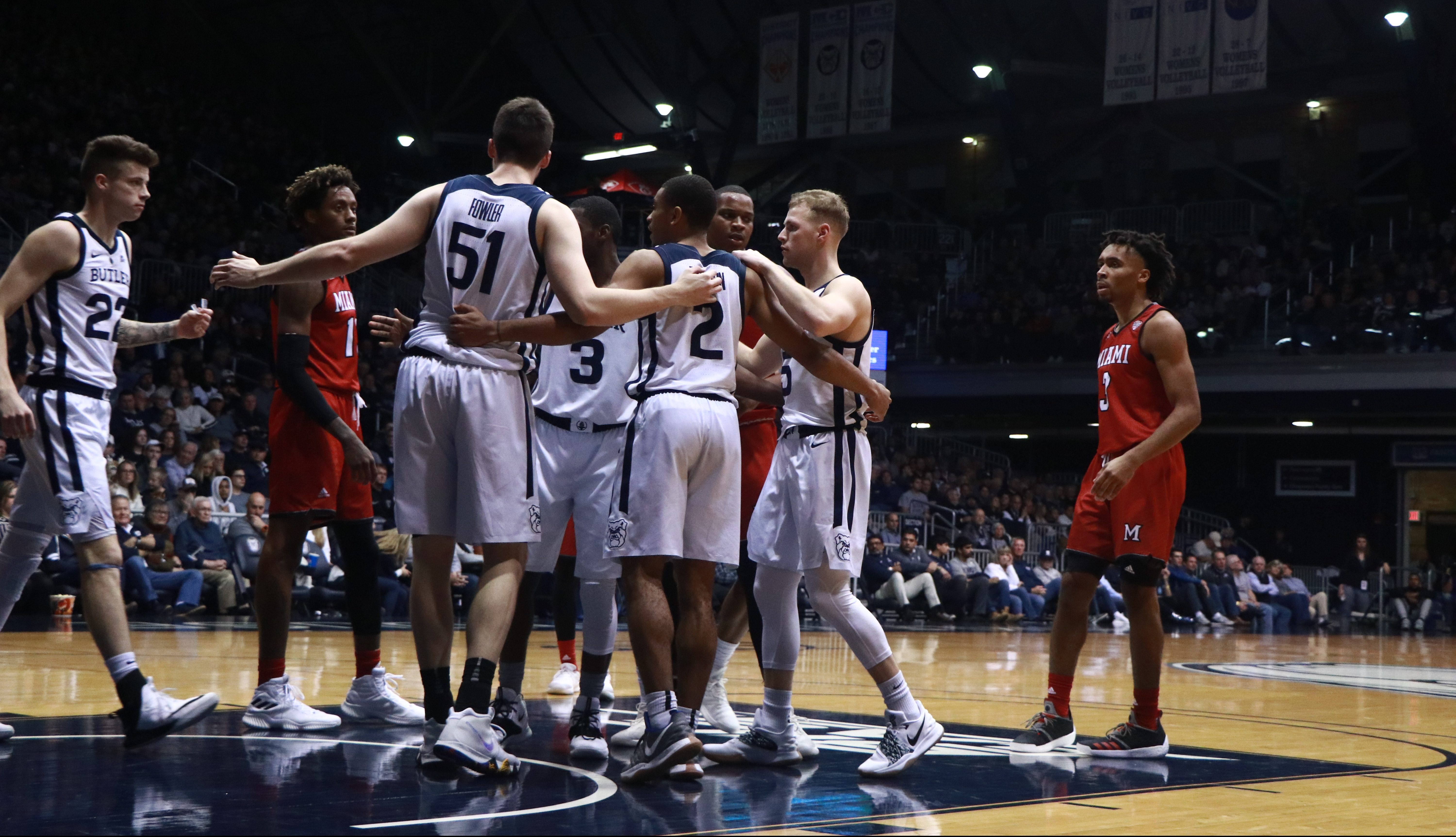 Butler’s men’s basketball team huddles up during a game. The Bulldogs are participating in the Battle 4 Atlantis tournament from Nov. 21 to Nov. 23. Jimmy Lafakis/Collegian file photo.

In a week headlined by basketball games, the Butler women’s team will kick us off with a game against the UMass Lowell River Hawks out of the America East Conference. The Bulldogs come into Hinkle Fieldhouse riding their three-game winning streak to start off the season, with their average margin of victory over 40 points. Senior Tori Schickel has led Butler so far this year, averaging 17 points and nearly nine rebounds a game. Tipoff is set for noon on Tuesday.

As part of their lone regular season tournament of the season, the Butler men’s basketball team heads to the Bahamas to compete in the Battle 4 Atlantis. In their opening game, the Bulldogs will square off with the Dayton Flyers. Dayton finished 2017-18 under .500 in its first year since Archie Miller left for Indiana, the program’s first losing season since 2005-06. The Butler-Dayton game will be aired on ESPNEWS and will begin from Paradise Island at 7 p.m.

If pro football isn’t their thing, Butler fans can enjoy some basketball on Thanksgiving as the men’s team will play as part of the Battle 4 Atlantis tournament. Should Butler get past Dayton, this game will almost certainly be against the fourth-ranked Virginia Cavaliers. If the Bulldogs lose on Wednesday, they will likely take on the Blue Raiders from Middle Tennessee State. An interesting storyline could be Indianapolis native Kyle Guy leading Virginia against his hometown team. The time and channel for this game are still to be determined.

To wrap up the Battle 4 Atlantis holiday tournament, the Butler men’s basketball team will play either Florida, Oklahoma, Stanford, or Wisconsin. All are Power 5 teams who have been to the Sweet 16 in the past five years despite only Wisconsin being the only one who is currently ranked. If the favorite were to win every game, Butler would play Florida, who they will face on Dec. 29. However, as we have seen before in these tournaments, unlikely outcomes should be expected. Follow @ButlerMBB for updates on the time and channel for this game.

As students begin to re-enter campus by the masses on Sunday, the Butler women’s basketball team will welcome them with a home game against the Illinois State Redbirds. These two played last year in Normal, Illinois, and it was the Bulldogs that won the 56-45 defensive battle. Tori Schickel, Kristen Spolyar, and Michelle Weaver led Butler over Illinois State with 12 points apiece. The game is scheduled to tip off from Hinkle Fieldhouse at 2 p.m.