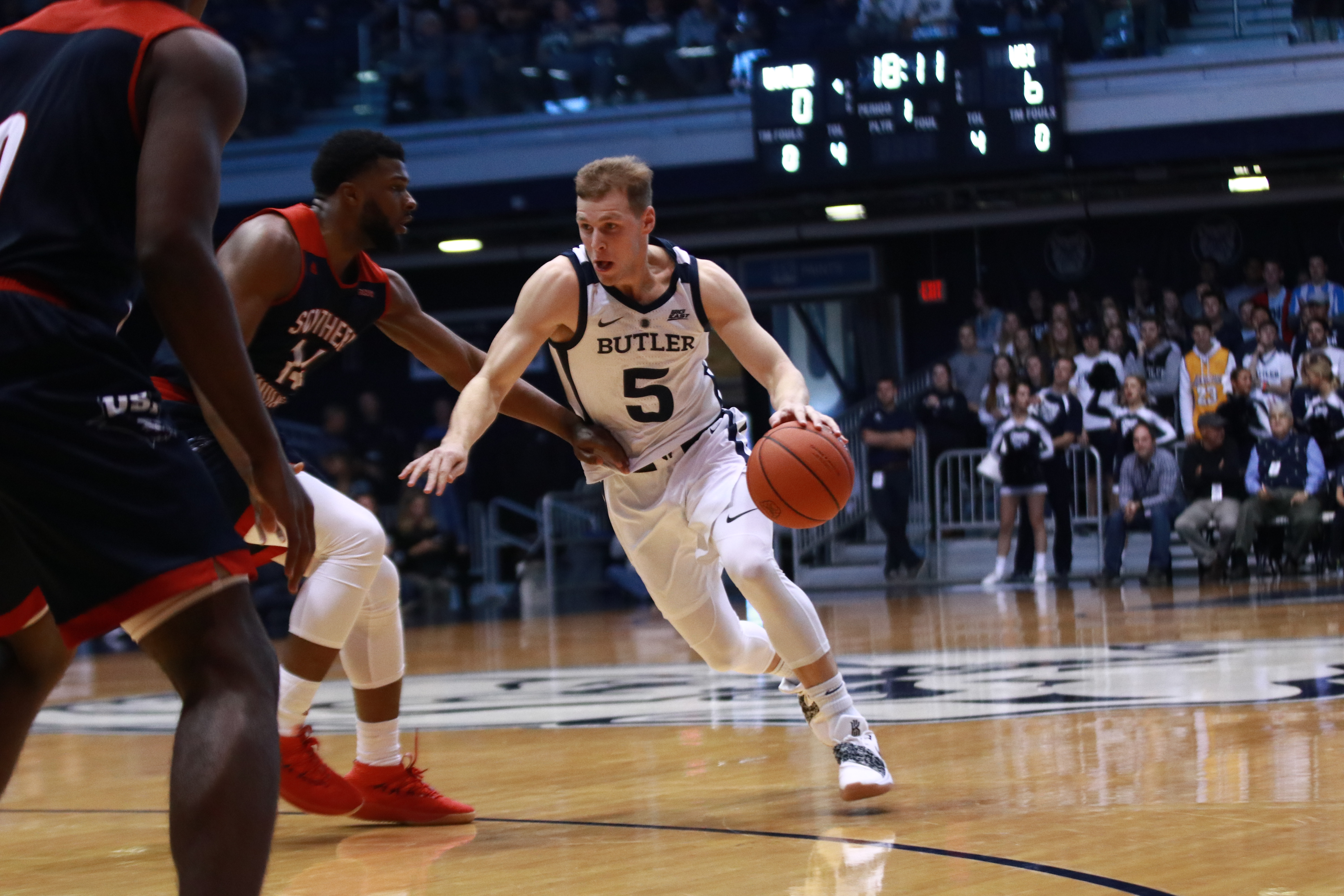 Paul Jorgensen drives to the basket during Butler’s 79-58 exhibition win over Southern Indiana on Nov. 3. Jorgensen led the Bulldogs with 24 points in the game. Photo by Jimmy Lafakis.

The Bulldogs converted just one shot through the first nearly six minutes of play and quickly found themselves with a nine-point deficit. Butler also struggled from beyond the arc early, hitting just one of their first eight 3-point attempts.

But midway through the first half the Bulldogs shifted the momentum, and Butler went on a 29-8 run in the final 12 minutes of the first half thanks in large part to Jorgensen, who at one point tallied seven consecutive points.

For the half, Butler converted just three of 13 attempts from 3-point range, compared to a six-of-nine first-half performance from USI.

Butler was able to keep the momentum in their favor throughout the second half, with Jorgensen and Joey Brunk each tallying double-digit points in the period as the Bulldogs outscored the Screaming Eagles 41-34.

Although the feat will not be official, Jorgensen’s 24 points surpassed his previous career-high of 23, which he scored last season against Villanova. Brunk ended the day with 14 points and seven rebounds, while Henry Baddley scored 13 points. The Bulldogs also forced 22 turnovers which resulted in 27 points.

“[Southern Indiana] came out ready and we did not,” Butler head coach LaVall Jordan said. “We had to respond to that. You’re going to have those nights. I think we learned a great lesson in terms of how we’re practicing translating into the start of a game.”

Jordan said there’s a sense the team is more comfortable offensively to begin the season than they were last year.

“The thing that the locker room would say is, just offensively, it’s not all new anymore,” Jordan said. “Now, [we’re] getting better timing, and guys are in a little bit different roles.”

Following their two exhibition contests, the Bulldogs will begin regular season play at home against Miami (Ohio) on Saturday, Nov. 10. Tipoff is at 7 p.m.