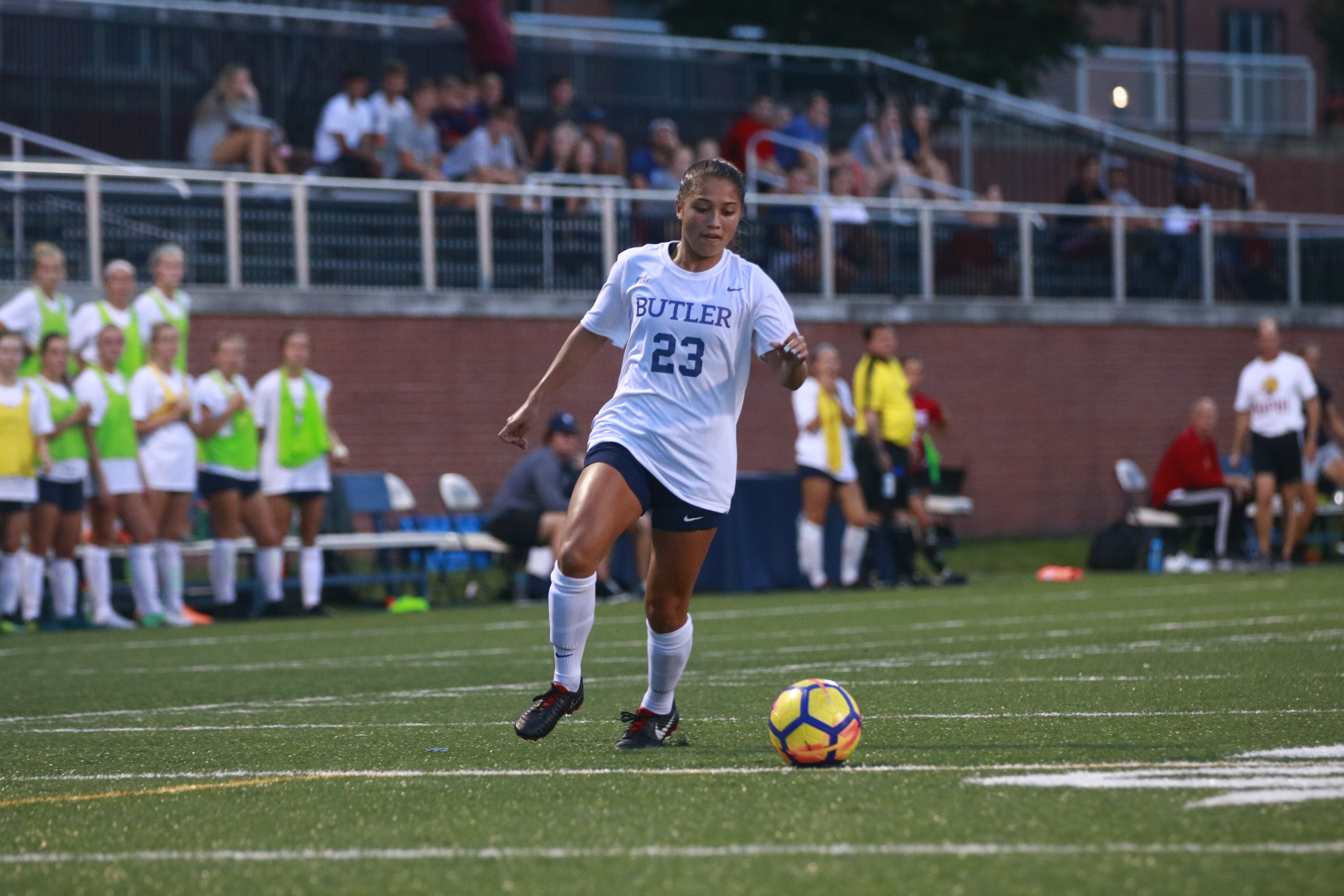 After tallying their first win of the season against 16th-ranked Western Michigan, the Butler men’s soccer team will look to earn their first home win of the season on Monday as they face Ivy League member Columbia. Although the 11th-ranked Bulldogs are not facing a ranked opponent in this game, the Lions should be taken seriously. In the second round of last year’s NCAA Tournament, No. 1 overall seed Wake Forest converted an 89th-minute penalty kick to barely escape Columbia, 1-0. Wake Forest would go on to defeat Butler in the next round. The Labor Day matchup kicks off from the Sellick Bowl at 1 p.m.

The newly-ranked Butler women’s soccer team returns home on Thursday as the Bulldogs take on the Evansville Purple Aces. Coming in at number 25 in the United Soccer Coaches Poll after wins over Notre Dame and Dayton, the Bulldogs are ready to continue their run of success this season. Butler freshman Morgan Kloosterman has scored on both shots she’s taken at home this season. The streak is on the line Thursday. Kickoff from the Sellick Bowl is at 7 p.m. Admission to the game is free thanks to butlerbulldoggear.com.

The Butler volleyball team hits the road once again after a successful Top Dawg Challenge as they head to the Ozarks to compete in the Arkansas Classic. The Bulldogs’ first match of the weekend tournament is against the host, the Arkansas Razorbacks. Competing in an SEC that had three ranked teams at the end of last season, Arkansas finished a respectable 9-9 in conference, including a close 3-2 loss to third-ranked and eventual national runner-up Florida. The game begins at Barnhill Arena in Fayetteville at 8 p.m.

A mere 15 hours after their first match in the Arkansas Classic, the Butler volleyball team is back at it again Saturday morning with a neutral-court game against the Northwestern Wildcats out of the Big Ten. On paper, the 2017 season looked really rough for Northwestern as they finished 4-16 in the conference. However, one must remember that the Big Ten sent eight teams to the NCAA Tournament last year, the most of any conference. Butler has won two of six matches against Big Ten opponents since joining the Big East in 2013. First serve from Barnhill Arena in Fayetteville, Arkansas, is set for 11 a.m.

With their third game in 22 hours, the Butler volleyball team wraps up the Arkansas Classic with a tilt against the Buffalo Bulls out of the MAC. Although these two teams did not face each other last year, it’s almost as if they had. They shared six common opponents with Butler finishing 6-2 in those games while the Bulls finished 4-4. The Bulls did pull off impressive wins, nevertheless, including games against Eastern Michigan and on the road against Georgetown; two games Butler lost last year. The match begins from Fayetteville at 6 p.m.

The football team continues its season on Saturday with a road game against the Taylor Trojans. While most notably recognized for their Silent Night basketball games, the football team is no laughing matter. These two played on September 16th of last year and it took a Will Marty touchdown with seven seconds left for the Bulldogs to squeak out a 27-21 victory. Marty completed 32 of his 48 pass attempts in that game for 253 yards and a score in addition to his rushing touchdown to win the game. Then-seniors Duvante Lane and Nick Weaver led the way in rushing and receiving, respectively. Kickoff from Turner Stadium in Upland, Indiana, is at 6 p.m.

The men’s soccer team heads out west on Saturday to face UC-Santa Barbara. Although they are not ranked, the Gauchos did receive votes in the most recent United Soccer Coaches’ Poll. Their 2-2 start to the season includes a win over Big East foe St. John’s, 2-0. Gauchos freshman Carter Clemmensen, 2017 USA Today All-USA Boys Soccer Player of the Year, leads the team thus far in goals. Likewise, freshmen contributed to 40 percent of the goal scoring for the Bulldogs through their first three games. Junior Brandon Guhl contributed the remaining 60 percent. Kickoff from Harder Stadium in Santa Barbara, CA is at 10 p.m.

As their competitive schedule kicks off, the women’s tennis team opens up with a home tourney as part of the Butler Fall Invite. Sophomore Emily Neal and junior Nina Bertino are players to look out for, as they led the team in wins a season ago. Interim head coach Matt Moore makes his competitive coaching debut for the Bulldogs. The action begins on Saturday at the outdoor tennis courts at a time that is still to be determined. The invite will continue into Sunday.

The Butler women’s soccer team plays host to the Northern Kentucky Norse out of Butler’s former conference, the Horizon League. However, the two were not in the conference at the same time. The Norse have already presented some trouble to Big East member Xavier, claiming a 1-0 victory over the Musketeers on Aug. 23. The Sellick Bowl hosts Daddy and Daughter Day on Sunday as the Bulldogs close out their home non-conference schedule. The game begins at 1 p.m.

The women’s golf team opens up their season with a trip out to Normal, Illinois, to participate in the Illinois State Invitational. This is our first opportunity to check out this year’s squad, which returns lone senior, Big East champion, and Academic All-American Lauren Tibbets. She has led the Bulldogs in scoring average each of the previous three seasons. The tournament tees off on Sunday and continues on Monday the 10th.