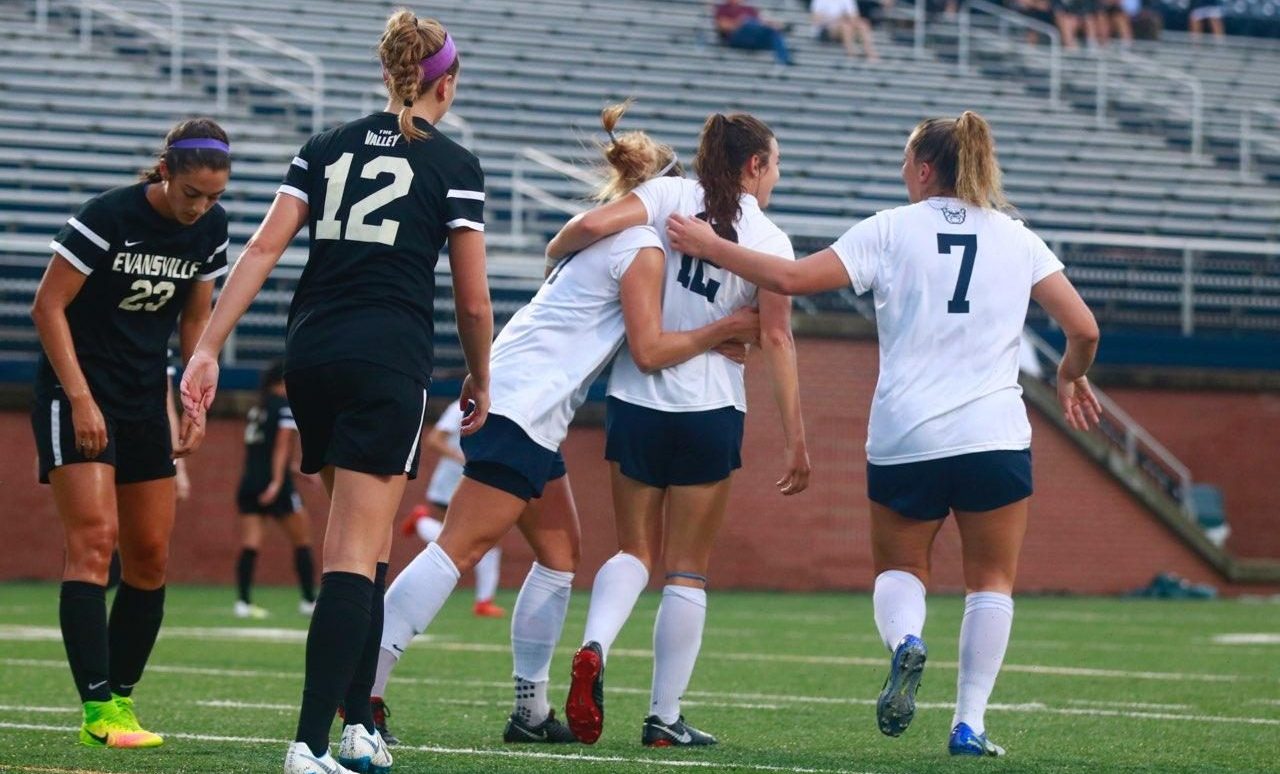 Halle Stelbasky is congratulated by teammates after scoring a goal in Butler’s 4-0 win over Evansville on Sept. 6. Stelbasky scored two goals in the game, her first of the season. Photo courtesy of Jimmy Lafakis.

The Butler women’s soccer team used a four-goal performance to sink the Evansville Purple Aces 4-0 at home and improve to 5-1 on Sept. 6.

The Bulldogs were victorious despite not being at full strength in the matchup. Butler was without senior forward Paige Monaghan, who did not play due to an illness.

The Bulldogs threw the first punch of the match as senior forward Halle Stelbasky netted her first goal of the season in the 15th minute. Freshman midfielder Katie Soderstrom paved the way by drawing a foul to the far right of the net and sending a free kick sailing towards the net for the Bulldogs.

“Katie was a huge part of the first goal, drawing that foul and setting it up to where I just tapped it in,” Stelbasky said.

Twelve minutes later, redshirt sophomore defender Amanda Kowalski scored her first goal of the season from inside the box, off another assist from Soderstrom, to give the Bulldogs a 2-0 lead over the Purple Aces.

The Bulldogs assumed control of most of the possession in the first half while out-shooting the Aces 6-0 in the first 45 minutes.

The second half was more of the same story as the Bulldogs continued to apply pressure on the Purple Aces while controlling the shot count 10-2.

“It’s always a point of emphasis for us to try and keep the goalkeepers not very busy at all and that was the case for us tonight fortunately,” co-head coach Rob Alman said.

In the 83rd minute, junior forward Carly Goehring netted her first goal of the season on a shot from roughly 20 yards out on the right side. Stelbasky then sealed the 4-0 win with her second goal of the night with a shot from just to the left of the net in the final minute.

“This was one of those games where we were playing a quality team and just had to focus on what our coaches were saying to get the win,” Stelbasky said.

The Bulldogs will continue their 2018 campaign with a Sept. 9 home matchup against Northern Kentucky.