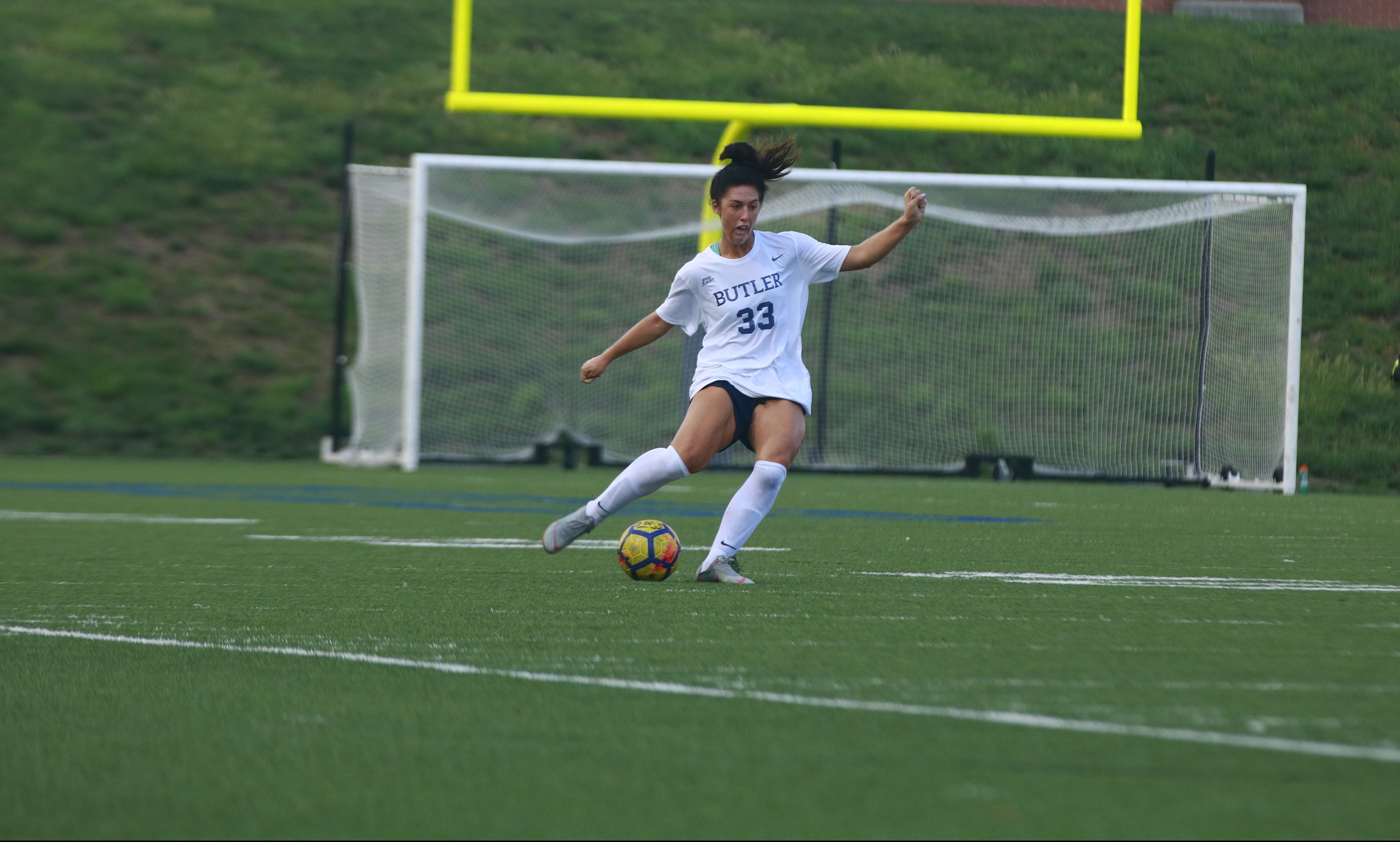 Cassidy Blacha makes a pass to a teammate. Blacha scored her first goal as a Bulldog in the win over Northern Kentucky. Jimmy Lafakis/Collegian file photo.

It wasn’t pretty, but the Butler women’s soccer team defeated Northern Kentucky 2-0 to improve to 6-1-0 on Sept. 9. The Bulldogs overcame a power outage to start the match along with a steady drizzle throughout the game to come away with a win over the Norse on senior day.

“I think we hit the nail on the head with some of the challenging situations just in terms of weather and little things out of the normal with the power going out,” co-head coach Rob Alman said. “Our group is really good at handling those moments and being even keel and steady with that stuff.”

Butler nearly took the lead near the 20 minute mark as senior forward Paige Monaghan sent a cross in from the near side. The ball took a bounce inside the box and was cleared away by the Northern Kentucky defense.

Junior forward Cassidy Blacha’s goal in the 33rd minute gave Butler a 1-0 lead over the Norse at the break. From straight on, Blacha took a low rolling shot that was originally saved but found enough momentum to slide past goalkeeper Emily Lohmann.

The second half was mostly uneventful until the 83rd minute when freshman forward Anja Savich scored to seal a 2-0 win for Butler. Savich’s fourth goal of the season sailed into the right side of the net from the top of the box.

“The nice thing for Anja was just her work rate today. It was tough for her in terms of what she was up against defensively but she understood that she had to put in a good shift for the team,” Alman said. “Her defensive work rate today was as high as it’s been all season and she got her reward with the goal.”

The Bulldogs will now embark on a challenging two-game road stretch against Big 12 foes Baylor and TCU. The programs have a combined record of 11-2-1 and were NCAA tournament participants in 2017.

“They’re both very very good programs and you’re going into hostile territory in terms of you’re playing at their place,” Alman said. “They’re two very different stylistic matchups for us to get ready for but we’re just going to focus on getting better and then take that on the road.”