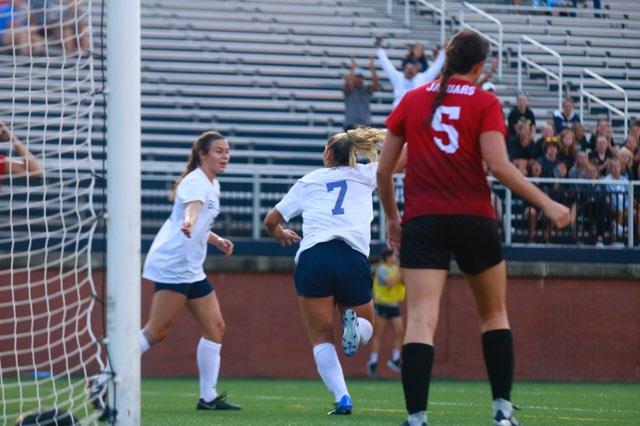 Freshman forward Anja Savich celebrates with a teammate after scoring the first of Butler’s two goals in the team’s 2-0 win over IUPUI on Aug. 20. Photo by Jimmy Lafakis.

The Butler women’s soccer team shut out IUPUI 2-0 at the Sellick Bowl en route to their second victory of the season on Aug. 20.

The scoring was commenced by freshman forward Anja Savich, who netted her third goal of the season in only two contests. The goal came in the 13th minute of play.

“She’s worked really hard through the early season, so it’s really nice for her to get her rewards with getting a few goals,” Alman said. “She’ll be the first one to tell you that a couple of [those goals] have come out from great play from her teammates and [from] us creating good chances as a team and quality chances for her. She’s fantastic in and around the box.”

Butler dominated the shot totals for the game, outshooting IUPUI 26-3.

With only three shots surrendered, Alman said his team was able to execute a difficult defensive game plan.

“We played a very aggressive game plan in terms of our pressing,” Alman said. “It was tough to execute at times against a team that’s very direct in some of their play and kept a couple players high at all times. We put a lot of confidence and trust in [our] back three to be able to organize that … and they did a pretty good job with it.”

Another freshman goal for the Bulldogs in the 82nd minute put the game out of reach. This one was scored by midfielder Morgan Kloosterman.

Butler was able to hold off IUPUI for the remainder of play, improving their record to 2-0 with the victory.

The Bulldogs will return to action on Aug. 26 with a home contest against 14th-ranked University of Notre Dame.