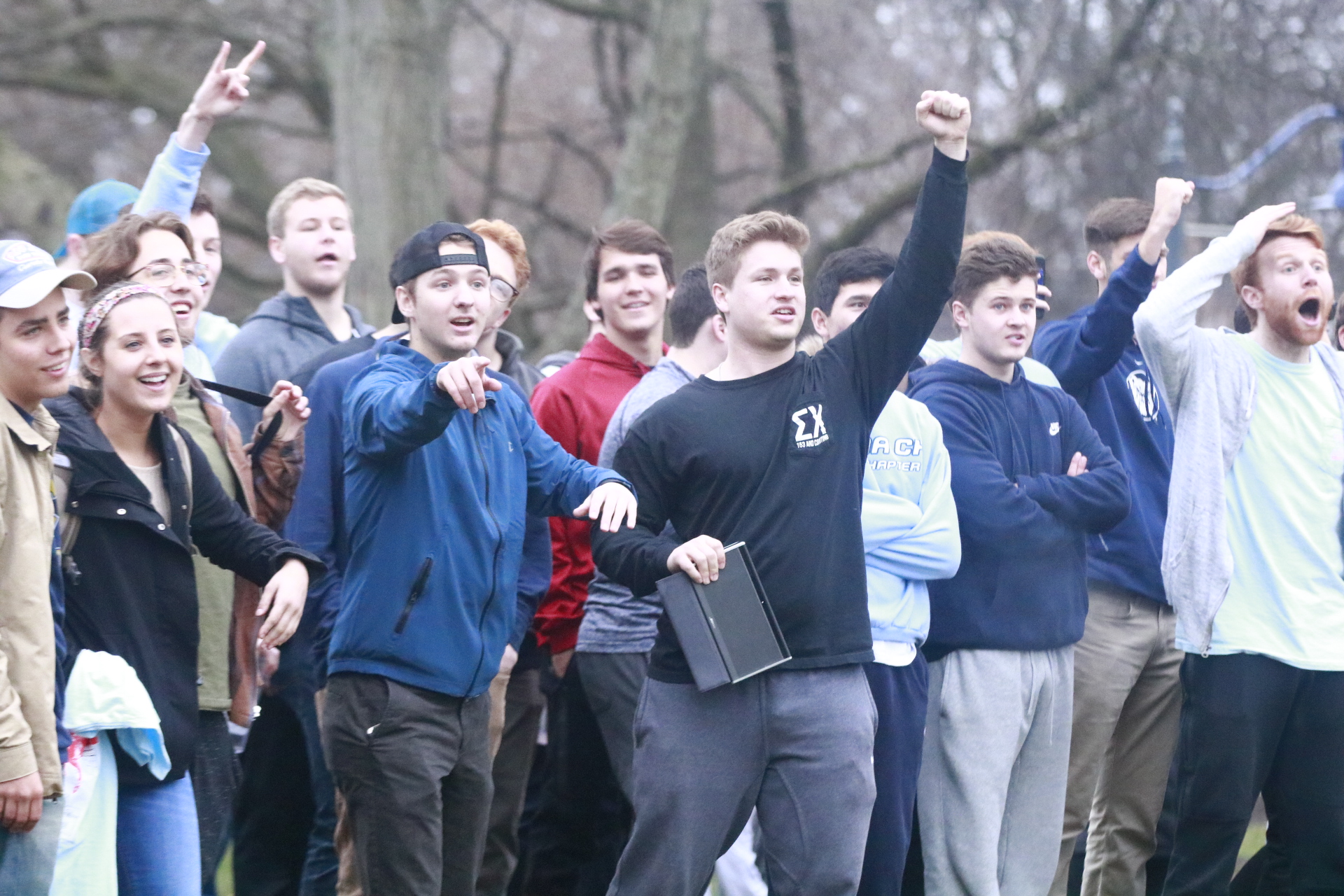 Greek Life has a huge impact on campus and in the surrounding community of Indianapolis. During this busy time of year it is hard to keep track of the number of service and philanthropy events taking place every year in a given week. Here is a recap of all the philanthropy, service, and events that took place on campus in the past week.

Alpha Phi’s Fourth Annual Red Dress Gala happened this past Saturday in the Reilly Room at 7 p.m. The night featured a silent auction, speakers and a fashion show.

The auction itself featured a wide variety of items, from fun, themed baskets to professional sports tickets and a weekend getaway. The fashion show featured clothing from local boutiques Brick and Belle Boutique, Grace Nicole, Pitaya and Sweet Olive Boutique. The clothes were modeled by members of Alpha Phi. A personal shopping day with three stylists who were Alpha Phi alumni was also auctioned off. Anne Farrell also came and spoke about her personal experiences with cardiac patients as a cardiologist.

Lauren Boswell is the vice president of community relations at Alpha Phi and worked with Katie Pfaff, Red Dress Gala chairwoman, and Lexi Hunt, Alpha Phi director of philanthropy, “to give students more opportunities to fundraise for women’s heart health and cardiac care.”

“We wanted to educate students about ways to take care of their hearts and live healthy lives, and we did so by promoting our event throughout the week and encouraging students to exercise at the health center,” Boswell said.

Alpha Chi Omega announced “Take Back The Night” on Friday, March 23. The event is a part of an international charitable foundation that seeks to end sexual violence. All proceeds from the event will go to the Julian Center and the Alpha Chi Omega Foundation.

The event is $5 and will take place in the Reilly Room on April 5 from 6 to 8 p.m. Food will include Goodfellas Pizza, Gigi’s Cupcakes, and entertainment by Butler’s women’s acapella group Freshly Brewed. There will also be an equal opportunity drawing and a campus walk.

Julia Bartusek is the current vice president of philanthropy for Alpha Chi Omega. She is very excited for this new event taking place.

“We’ve received a lot of support from the Office of Health Education and Outreach Programs. It’s a great kick off for Sexual assault awareness month,” Bartusek said.

Delta Tau Delta and Kappa Alpha Theta had a new event at Title Boxing Club in the Glendale Mall Sunday, March 25. The event included a kickboxing lesson and a guided workout with an instructor.

Nathan Jent is a junior and the sorority relations chair for Delta Tau Delta, and his job is to set up fun and sober events for his fraternity brothers and the sisters of the other sororities to do together.

“We’ve done it in the past and it had really positive feedback before. It’s definitely a challenging full body workout, but it’s something that not everyone gets to do, so it’s new and fun,” Jent said. “Title boxing even wants to set up more connections with butler students because their members really enjoy when we help them fill up their gym. I think everyone who went would love to do it again sometime.”

DG Delight took place yesterday at the Delta Gamma sorority house from 7 to 9 p.m. where students could enjoy treats made by the sorority’s chef.

The event is a fundraiser that occurs twice a school year where all of the proceeds go to the Delta Gamma Foundation and Indiana School for the Blind and Visually Impaired.

Bailee Dodson is vice president of foundation and is heavily involved with philanthropy in her sorority and on campus.

“Butler DG is blessed to have the Indiana School for the Blind and Visually Impaired down the street because there are only four blind schools across the nation,” Dodson explained. “Last year we raised 20K and we cannot wait to see what we are capable of reaching next year during the month of October.”

Sigma Chi’s annual Philanthropy “Derby Days” began Monday with a kickball game on the mall. The theme for this year’s philanthropy is Seven Derby Sins extending from March 25 to March 30.

Derby Days is the fraternity’s philanthropy that supports the Huntsman Cancer Institute. Before the week started they had raised $10,000 for the organization and hope to reach $20,000 by the end of the week.

Each day is a different theme with different events. Monday’s theme was “pride” and Tuesday’s theme was “gluttony.” The sins chose for each day coincide with the events taking place. There was also a game of “Where’s Waldo?”

The sins for each day will be announced daily. The remaining events include derby queen pageant, pie-a-Sig, dunk-a-Sig, and Lip Syncs.

Last week was Sigma Nu’s SNUperbowl, the fraternity’s annual philanthropy week during the spring that supports Habitat for Humanity of Indianapolis. However, the main event of the SNUperbowl football tournament was cancelled Saturday due to snow.

Tyler Kennedy is the Philanthropy and Service Chairman and says there is hope that the event will be rescheduled. If it cannot be scheduled for this year, Kennedy said they might host the tournament next semester.

Everyone on campus is welcome to contribute to the philanthropic events taking place.