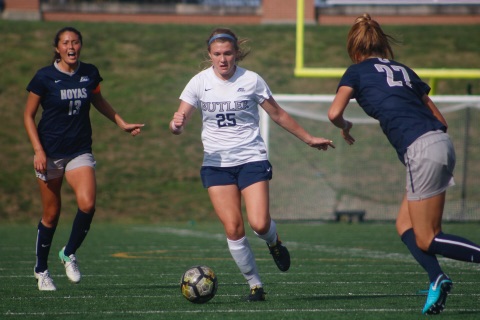 No. 22 Butler women’s soccer team tied Georgetown University 0-0 on at the Sellick Bowl on senior day on Oct. 22.

Both teams had several chances to score but were unable to find a goal. The Hoyas closest shot came in the 23rd minute, when sophomore Paula Germino-Watnick has a shot hit the left post.

The Bulldogs nearly won the game in the second overtime. In the 102nd minute, freshman forward Caitlyn DiSarcina had a breakaway chance to end the game. Her shot was blocked and junior defender Madison Toth’s shot off the rebound went wide.

“We had to roll up our sleeves,” junior forward Paige Monaghan said after the game. “We did a good job of what we planned on throughout the week. Unfortunately, we couldn’t capitalize on some of our opportunities today.”

The Hoyas outshot the Bulldogs 14-10 in the match. DiSarcina and junior forward Halle Stelbasky led the Bulldogs with two shots, respectively.

Redshirt sophomore goalkeeper Hannah Luedtke made one save in the first half, while freshman Leonie Doege made five throughout the rest of the game.

“We’ll prepare with anything that will come at us the next few games,” DiSarcina said. “Our main focus right now is Villanova and getting those three points.”