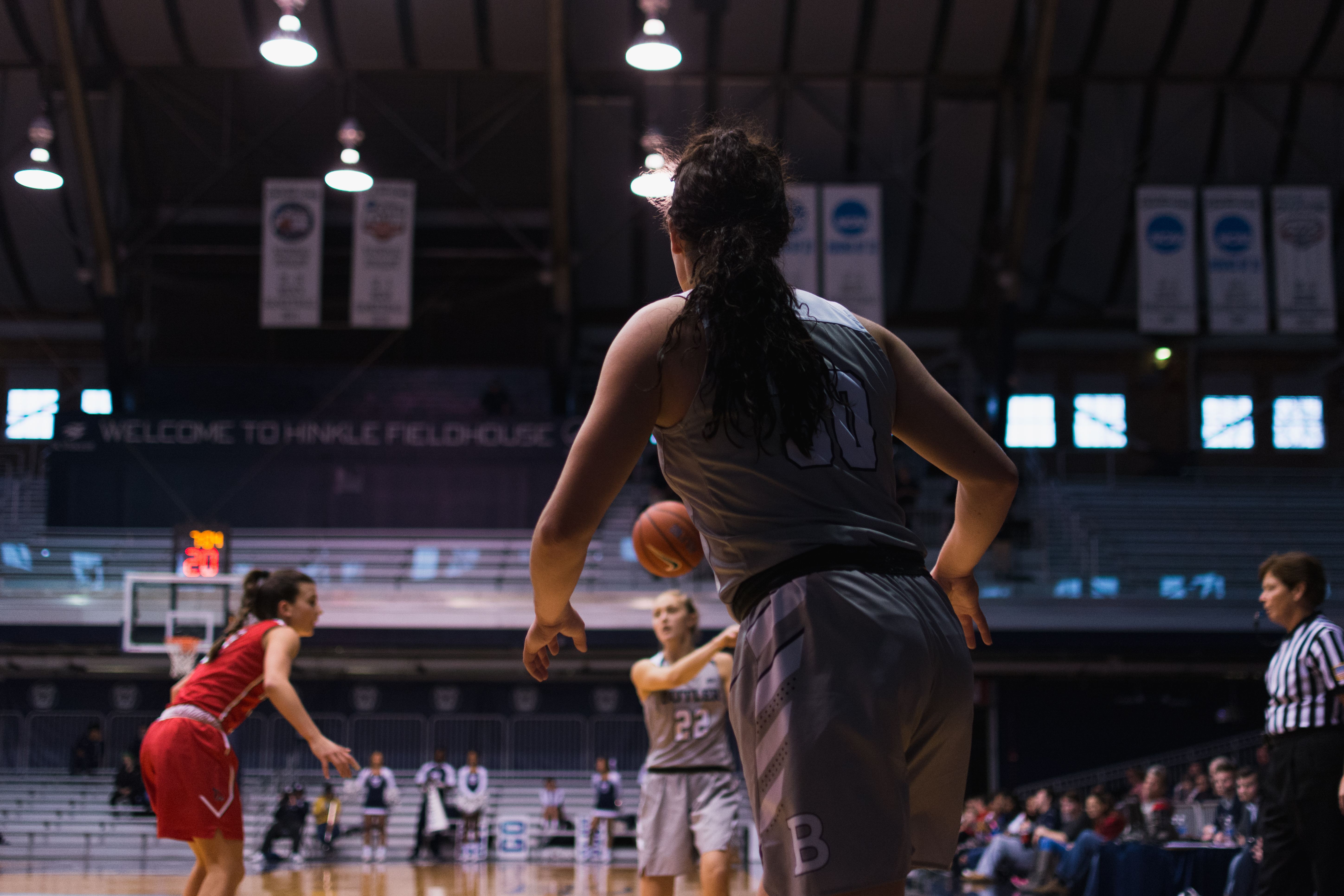 Alexa Bailey passes the ball to Sydney Shelton during a game against Ball State. Photo by Adam Cvik.

Butler women’s basketball ran out of steam against Villanova University, losing 70-69 at Hinkel Fieldhouse on Jan. 20.

The Bulldogs began the game with a hot start. Butler led 19-5 after the first quarter with the help of some stellar defense. In the opening 15 minutes of action, the Bulldog defense held Villanova to eight percent from the field and 0 of 10 from behind the arc.

Butler had a 14 point lead at halftime: 33-19. Sophomore Tori Schickel already had a double-double at the break, with 12 points and 11 rebounds. The Bulldogs seemed to have things under control, leading 43 to 29 going into the fourth quarter and leading by as many as 22 points in the third quarter.

Then the Wildcats pulled off the comeback.

Villanova fought their way back throughout the fourth quarter with the help of seven made shots and five made three-point field goals.

With 14 seconds left, junior Sydney Buck hit two momentous free throws to put Butler up 55 to 51. Villanova answered with a three-pointer from Adrianna Hahn to get Villanova within one point.

After two sets of free throws being made both ways, Villanova found themselves with the ball and down three with five seconds left. As Villanova starter Alex Louin brought the ball down the court, Alexa Bailey fouled her in the act of throwing up a 33-foot three pointer. Louin kept her composure and made all three free throws to force overtime.

After Schickel made an early putback attempt in the overtime, Villanova answered with another three. The Wildcats built a 69-63 lead with 26 seconds left in the overtime period. Then, Butler began a tear of their own, with Schickel hitting three of four free throws and a Buck desperation three. However, the Bulldogs ran out of time and fell to Villanova.

Butler dominated in the paint, outscoring Villanova 36 to 14. The difference came from the perimeter, as Villanova made 11 three-point field goals, 10 of them coming in the second half or overtime.

Mary Gedaka and Grace Stant were key off-the-bench players for the Wildcats. Gedaka scored 20 points while going 9 of 11 from the free throw line. Stant scored 14 points and hit four shots from three.

Schickel led the Bulldogs offensively, with 28 points and 20 rebounds. She now has over 500 career points in her second season, and is on pace to eclipse the 1,000 point mark. Schickel said the youth of the team hurt them down the stretch.

Buck had 19 points while knocking down a season-high four three-pointers. Buck said it was the first game this year where she was able to consistently knock down shots.

“It felt good to get back into my rhythm,” Buck said. “This one was really tough, but we have to just get back to work tomorrow and put it behind us.”

The loss puts Butler women’s basketball at 5-14 on the season and 2-6 in the Big East Conference. The team is back at Hinkle on Jan. 22 at 1 p.m. for a game against Georgetown University.