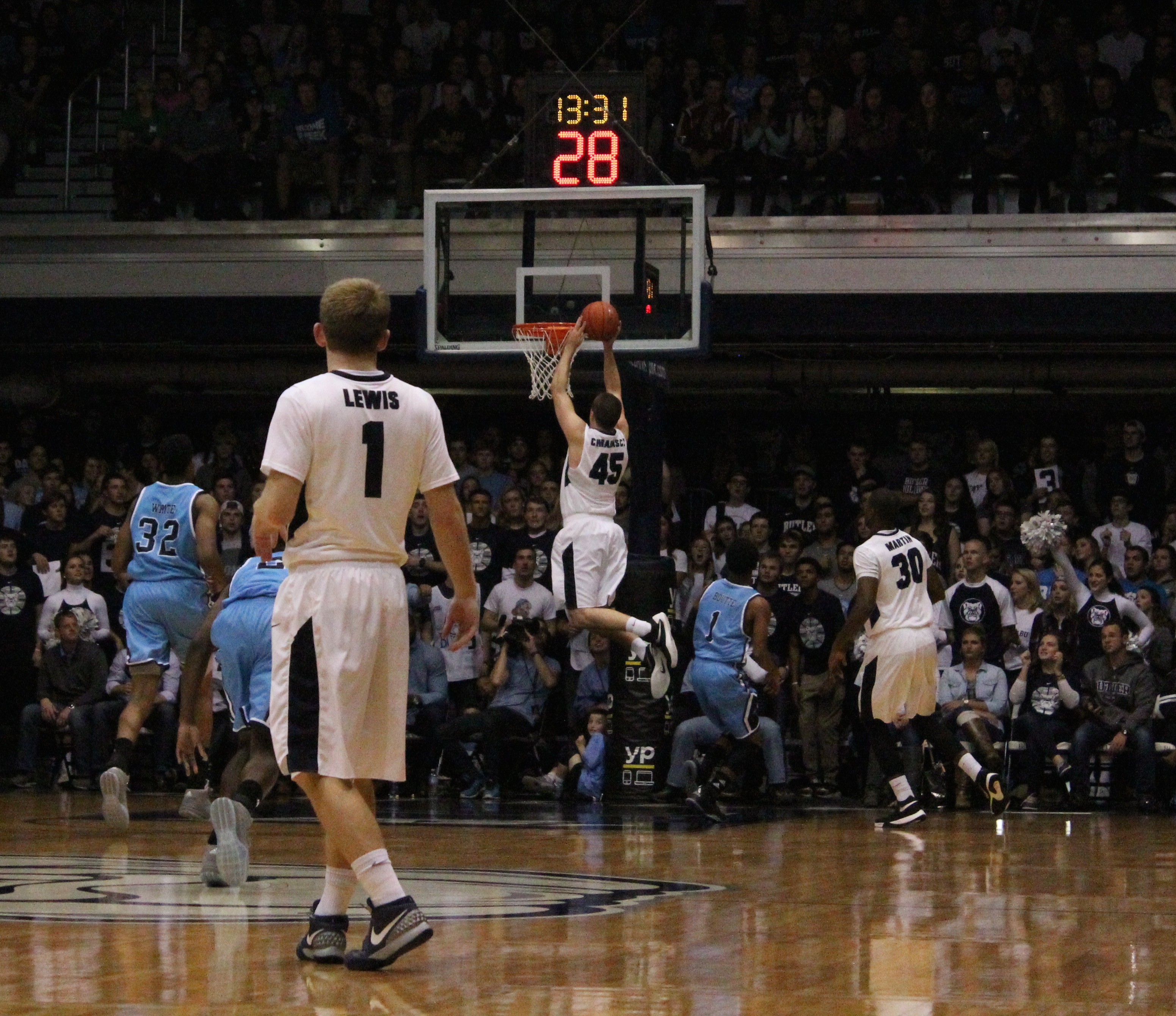 The Butler University men’s basketball team plays their first game of the season on Saturday in Hinkle Fieldhouse, facing Wabash College in an exhibition match.

The exhibition games and early season practices are important for this Bulldog team, which features six scholarship players who have yet to play in a Butler uniform. They include transfers Avery Woodson and Kethan Savage, redshirt freshman Sean McDermott and freshmen Kamar Baldwin, Henry Baddley and Joey Brunk.

Due to these circumstances, head coach Chris Holtmann scheduled the finite amount of practices the team has before the season starts differently than last year.

“You can kind of backload it (like last year) and have less days off on the backend or you can spread it out,” Holtmann said. “This year we’ve kind of spread it out. We started about as early as we could start.”

During this time, Holtmann said the team’s main focus has been threefold: blending the group together as quickly as possible, trying to get the team to understand each other’s strengths and having the new faces learn the team’s system.

A familiar face for Bulldog fans, junior forward Kelan Martin, was selected to the Preseason All-Big East First team. Martin said he was honored to be chosen but is focused on the bigger picture.

“I’m all about my team,” Martin said. “I want to get as far as we can in this season, like Big East Tournament play and March Madness. I just want to win.”

Martin averaged just under 16 points per game for Butler last season, so he will have an important role in the team’s offensive success this year. Martin said he is focused on becoming a well-rounded two-way player and highlighted rebounding, assists and better defense as staples of that goal.

Holtmann and Martin said the team must be connected in order to succeed. Martin said they stress this every day in practice whether it be tightening up their huddles or supporting and teaching one another along the way.

In order for the Bulldogs to function as a single unit and thrive on the court, Holtmann said players who were not in leadership roles last year must become leaders during the 2016-17 campaign.

Holtmann said Kellen Dunham, Roosevelt Jones and Austin Etherington, who all graduated last year, led the team for the most part. As for who will replace them, Holtmann noted senior forward Andrew Chrabascz and senior guard Steven Bennett have strong voices within the team’s locker room.

Like Martin, Chrabascz will be a returning force for the Bulldogs. Last season, he averaged just under 11 points per game, just over four rebounds per game and poured in 25 points in Butler’s loss against the Midwest Region top seed University of Virginia.

Holtmann also said Woodson, a graduate transfer from the University of Memphis, is someone he thinks will have a leadership role.

“His ability to step in and help us right away is going to be really important, and I think of the new guys that we’ve had, he’s probably been consistently as good as anybody on a day-to-day basis in practice of the guys that are new faces to us,” Holtmann said.

As for the playing style of this team, that is still up for discussion. Holtmann said the 2014-15 team was more defensively gifted while last year’s team was more offensive minded. He said this year should be different.

Lewis, who played in 29 of the 33 games Butler had last year after sitting out the year before as a transfer, averaged nearly six points, three assists and two rebounds per game. He also led the team in free throw shooting with an 85 percent mark and racked up the second most assists on the team.

Savage, similar to Lewis, had to sit out a year as a transfer but will look to make a positive impact when he sees action for the first time this year. As a junior at George Washington University, Savage produced an average of 12 points and five rebounds per game.

As for the three true freshman, Baldwin, Baddley and Brunk, Holtmann said they each have had bright moments in practice while still trying to learn the nuances of Butler’s system and philosophy.

On Saturday, Butler fans will get to see all of these new faces for the first time. Savage said he is more than ready for the season to get started, especially after getting his first taste of what the atmosphere on game days at Butler is like.

“I can’t even put it into words really,” Savage said about his excitement for the first contest. “I’ve been sitting out for so long it seems like, so now that it is finally here, it’s kind of crazy to think about. In Indiana in general, I just feel like love is basketball.”