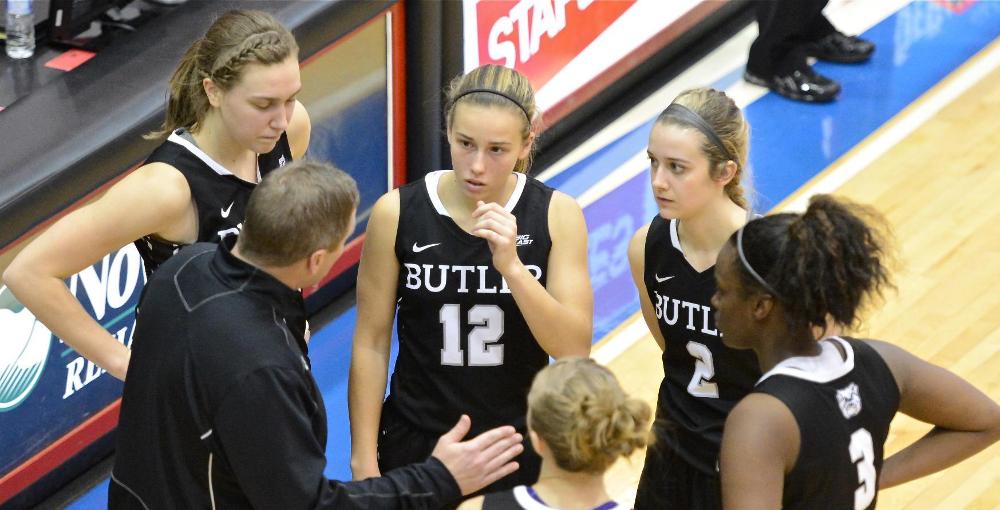 The Butler University women’s basketball team lost both games in their final weekend of the regular season, first to Georgetown University 49-35 on Feb. 26 and then to Villanova University 66-46 on Feb. 28.

The two losses put the Bulldogs at 9-20 on the season and 4-14 in the Big East Conference.

Butler got off to a slow start in the first game against Georgetown. It wasn’t until after the first media timeout that Butler scored, thanks to a 3-pointer from red-shirt freshman forward/guard Nicole Orr.

Georgetown got off to a slow start as well. Senior guard Blaire Langlois followed up Orr’s 3-pointer with one of her own to take the lead. It was the only time the Bulldogs held a lead.

At the end of the first quarter, the Hoyas led Butler 13-10.

Both Langlois and senior forward/center Belle Obert were the only players to score in the second quarter for the Bulldogs, both making 3-pointers. Georgetown went into halftime with a 26-17 lead.

Halftime stats at McDonough Arena: Butler limited to just six made FG due to 15 1st half turnovers pic.twitter.com/b3cHqhjI9a

The Bulldogs couldn’t find momentum in the third quarter, and Georgetown maintained the lead. The Hoyas outscored the Bulldogs just 13-11, but ended the quarter with a 39-28 lead.

The fourth quarter was no different as Georgetown barely outscored Butler 10-7, but was able to hold out for a 14 point victory.

Langlois was the star of the game, scoring 18 points. Her point total was more than the rest of the team combined. Freshman forward Brittany Ward was a distant second with six points.

The team made the trip to Philadelphia to wrap up the season against Villanova.

Just like against Georgetown, Butler had a slow start and fell behind. Freshman guard Taylor Buford came off the bench and scored the first points for the Bulldogs nearly five minutes into the game.

Butler made a comeback toward the end of the second quarter and went into halftime trailing by four points. Villanova shot just 17 percent from the field, while Butler shot a still dismal 26 percent.

Villanova found their way in the second half, and Butler had no chance. They outscored the Bulldogs 19-11 in the third quarter, and scored a whopping 26 points in the fourth quarter to defeat Butler by 20 points.

Freshman forward Tori Schickel was the leading scorer for the Bulldogs with 17 points and 11 rebounds in her first time starting since returning from an illness. Following Schickel was sophomore guard Sydney Buck with 14 points.

Freshman guard Michelle Weaver and Obert did not play on Sunday due to injury. Obert is listed day-to-day with a foot injury.

Butler heads into the Big East Tournament as the No. 9 seed. They will play No. 8 seeded Xavier University at 5:30 p.m. ET on Mar. 5 in Chicago. The game can be watched live on the Big East Digital Network.