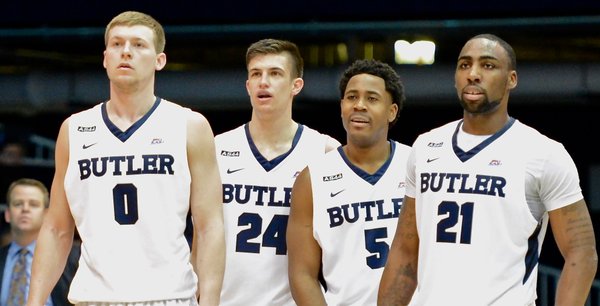 The Butler University men’s basketball team closed out the season with an impressive 95-74 win against Marquette University on March 6 at Hinkle Fieldhouse.

Butler started the game on top and dominated the first several minutes of the game. More than halfway through the first half, Butler held a 20-6 lead over Marquette.

Shortly after, Marquette went on an 11-0 run to close to within three of the Bulldogs. Butler responded with a run of their own and went into halftime with a 53-34 lead.

After halftime, Marquette was never able to recover and close in like they did in the first half. At one point, Butler held a 30 point lead over Marquette.

As the game was coming to a close, head coach Chris Holtmann pulled the seniors out one by one to a standing ovation.

Etherington led the way for the Bulldogs with 18 points and five rebounds. Jones followed close behind with 15 points and six rebounds, while Dunham had 12 points and Gathers had eight points.

After the game, Holtmann expressed his gratitude and respect for Dunham and Jones.

“These are two of the most impactful guys to wear a Butler uniform, and that’s saying something with the history here,” Holtmann said. “It’s an honor to play here. It’s an honor to coach here. That’s because of who was here before you.

“These seniors have changed Butler for the better and Butler has changed them for the better. They’ll be successful in whatever they choose to do.”

The Big East announced its yearly honors, and three Butler players were given accolades. Dunham received All-Big East Honorable Mention, and Jones and Martin were named to the Second Team All-Big East.

Here it is – your 2016 BIG EAST Tournament bracket. Get your tickets at https://t.co/Ukeqc9kddJ. #MadeAtMSG pic.twitter.com/ahZmBftUdA

Butler finishes the regular season with a 21-9 record, 10-8 in the Big East Conference. Butler tied for fourth in the final Big East standings and will be the No. 5 seed in the upcoming Big East Tournament in New York City. The Bulldogs will play No. 4 Providence College March 10 at 2:30 p.m.