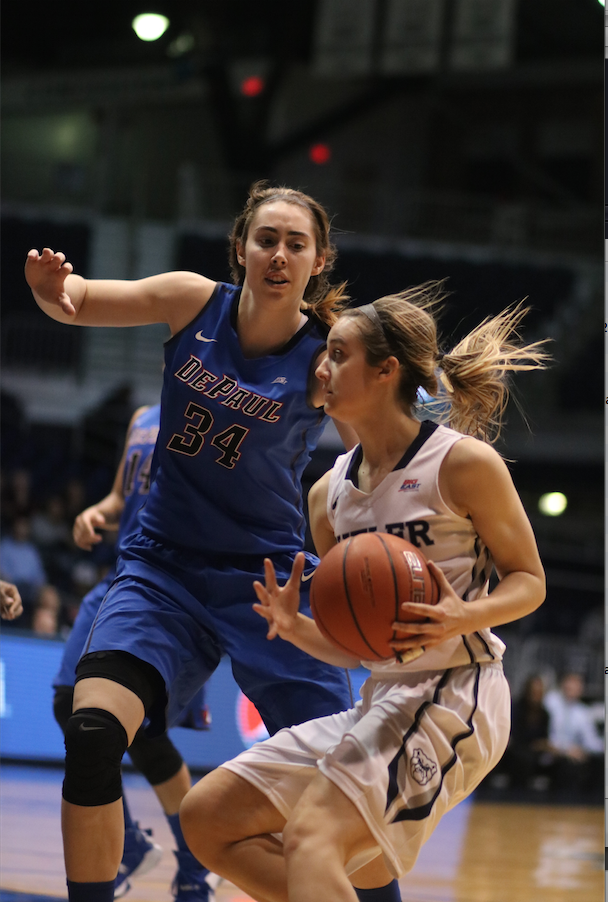 The Butler University women’s basketball team played a strong game against the nationally ranked DePaul University on Jan. 15, but it wasn’t enough as Butler suffered their tenth loss of the season, now sitting at 7-10 on the season, 2-4 in the Big East.

“I thought our kids gave a tremendous amount of effort,” said Butler head coach Kurt Godlevske. “DePaul is obviously a very good basketball team. I thought defensively, maybe this was the best game we’ve had.”

The game got off to a strong start for the Bulldogs. Although DePaul won the tip, Butler’s senior forward Belle Obert put the first points on the board, giving Butler a 2-0 lead. DePaul quickly followed that up with a 3-pointer. The lead would exchange three times in the beginning of the game before DePaul took control of the first half.

The first quarter ended with DePaul up 14-8 over Butler.

DePaul with a last second shot to end the first quarter. DePaul leads 14-8 after 1 #ButlerWBB

The Blue Demons started the second quarter strong and went on a 4-0 run before Butler called a timeout with 8:25 left. Butler went on a tear of their own with a 9-5 run, ending with a DePaul timeout and a shrunken 23-17 DePaul lead. DePaul went into halftime with a 34-24 lead.

Butler started the third quarter with a 9-8 advantage over DePaul in the first five minutes. Butler shrunk the lead to within six points before DePaul opened it back up to 42-33 halfway through. The second half of the third quarter was much more calm and offered limited scoring. At the end of the third, DePaul led Butler 48-37.

The fourth quarter was played much like the first three. DePaul started the quarter off well and increased their lead over Butler. But as the quarter went on, Butler fought back. With one minute left in the game, DePaul held a 58-49 lead. In the final minute, the Bulldogs were able to score five points and tighten up the game.

DePaul held on strong and put three points on the board themselves, winning the game with a final score of 61-54.

“All around, I felt like we played good, and we played hard,” said freshman forward Brittany Ward. “You know, that’s one of the top teams in our division, and we actually stuck with them.”

Shooting seemed to be the biggest struggle for the Bulldogs tonight. Both Godlevske and the players agreed.

“I wish we would’ve shot the ball better,” Godlevske said. “If we had done that, and we figure some things out…this season could be very special.”

Ward added, “I felt like we just had to knock down a couple more shots, and we were right there with them.”

Defensively, tonight’s game was one of the best Butler has played, and it showed as they held DePaul to 61 points.

“All week long in practice we worked on our defensive intensity,” Langlois said. “I think it showed tonight. [DePaul] averages a ton of points, and we held them to 61.”

Although a win is always preferred, there was much to be taken out of this game as the Bulldogs get one day off before facing Marquette on Jan. 17 at 2 p.m. ET.