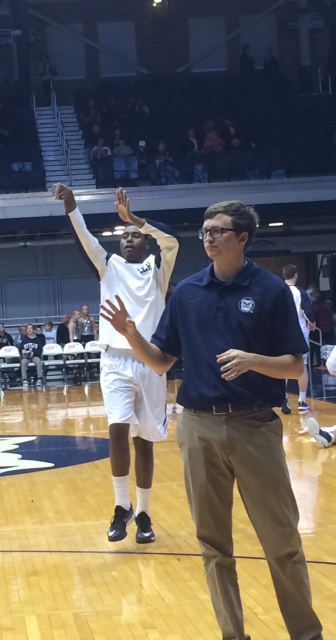 Freshman Kelan Martin had a breakout game for the Bulldogs, finishing with a career-high 23 points on 9-of-13 shooting.

Interim head coach Chris Holtmann said he had a feeling Martin was going to have a big game, based on what the freshman had done in practice.

“He got some jitters out the first couple games,” Holtmann said. “I thought he was going to play well because he’s practiced well. He really can shoot the ball. He’s been one of our best shooters in practice.”

Butler (3-0) got 39 points from the bench. Loyola (2-2) had zero. The Greyhounds had only three players score in the game.

One of the key bench contributors for Butler was transfer Austin Etherington. He finished with nine points on 3-of-4 shooting.

Holtmann said the things that make Etherington effective are his effort and intensity—both of which have been on full display through the team’s first three games.

One player missing from Butler’s roster was Jackson Aldridge, who suffered an ankle injury last Saturday and is battling the flu. Holtmann said he expects the senior to be available Wednesday.

The defense for Butler was strong, forcing 20 Greyhounds turnovers. The offense capitalized, scoring 37 points off the miscues.

The Bulldogs rolled in the first half, jumping out to as much as a 24-point lead.

Martin had 11 points in the opening period, including going 3-for-4 from behind the arc.

The second half saw more of the same dominance. Butler extended its lead to as much as 43 with just under eight minutes to play.

Loyola was held scoreless for the last 6:48 of the game.

All 11 players on Butler’s roster saw at least five minutes of action.

The team faces a much stiffer test this week, as it travels to the Bahamas for the ‘Battle 4 Atlantis’ tournament. Butler will play No. 6 North Carolina in the opening game on Wednesday at noon.

Holtmann said his team knows what they are up against.

“These games are not ones where you have to give a rah-rah speech to your players,” he said. “They understand what is coming.”

Holtmann said the difficulty of the upcoming schedule will only benefit the team come conference play.

“We did it for a reason,” he said. “We want to prepare better for the Big East part of our season.”