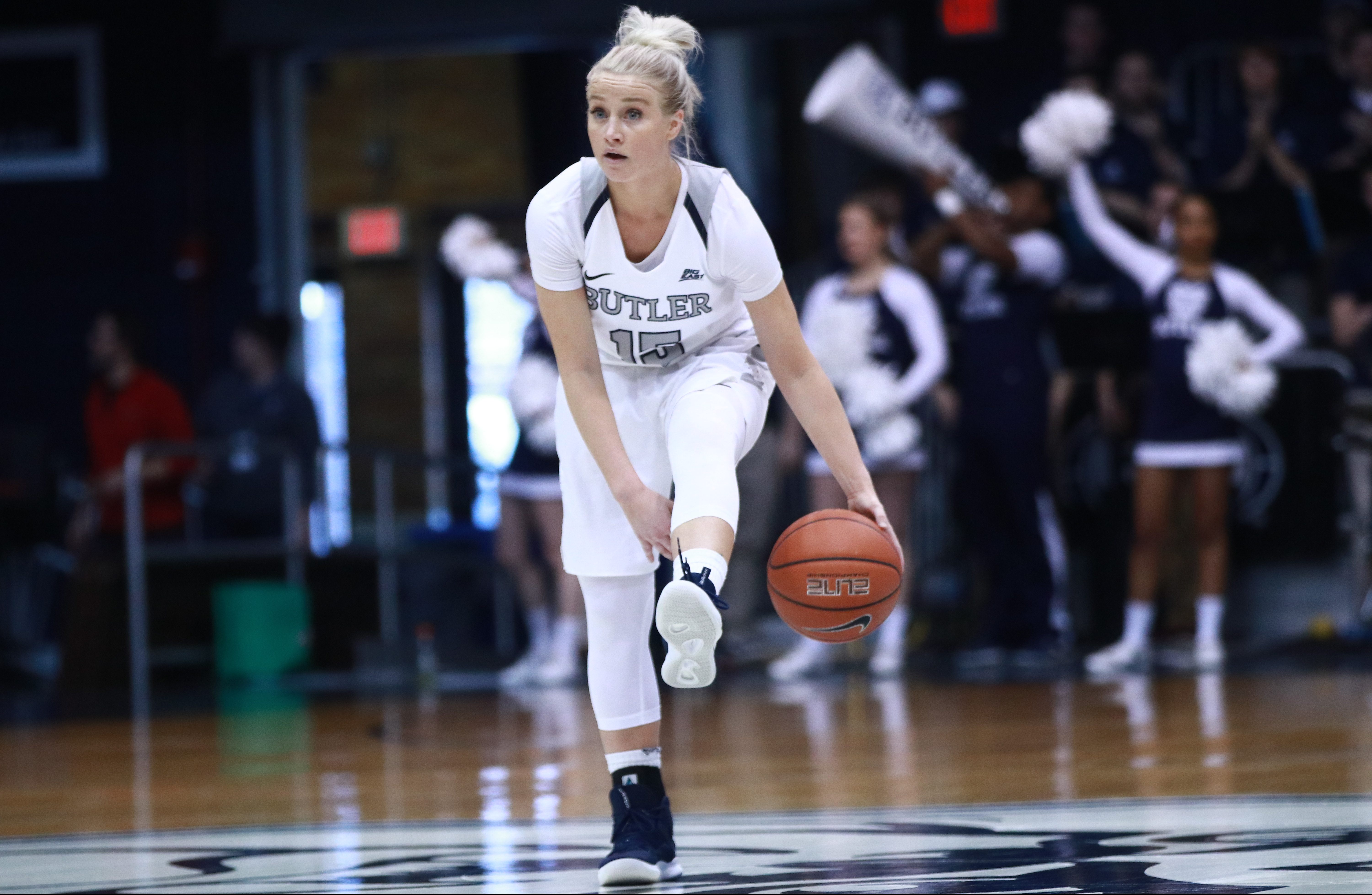 Whitney Jennings dribbles the ball up the court during a game this season. Jennings and the Butler women’s basketball team face Creighton in the Big East Tournament on March 10. Jimmy Lafakis/Collegian file photo.

The Butler women’s basketball team was already locked into the No. 3 seed in the Big East Tournament; it just had to wait to see what happened in two games on March 3, one at 1 p.m. and the other at 2 p.m., to determine who they’d play. With two teams — Creighton and Providence — owning identical 8-9 conference records, the No. 6 seed was up for grabs.

Ultimately, Creighton fell 74-67 to DePaul, and Providence got destroyed by Marquette, 80-57. The Blue Jays, though, held the tiebreaker over the Friars.

Creighton, 14-15 overall and 8-10 in the conference, will be the No. 6 seed pitted against the Bulldogs in the quarterfinals on March 10 at 9:30 p.m in Wintrust Arena. The game will be aired on FS2.

Butler beat Creighton on Jan. 20 and Feb. 15, by scores of 75-43 and 66-46, respectively. Creighton was the only team to defeat the top two seeds, Marquette and DePaul, in the conference.

The title of the top defense in the Big East belongs to the Bulldogs, who concede 57.8 points per game, which should pose a problem to Creighton’s offense. In the prior two games versus the Bulldogs, the Blue Jays shot an average of 29 percent from the field and 23 percent from deep, with Faber averaging 9.5 points on 32 percent shooting.

Creighton isn’t a great defensive team, either. They are eighth in the Big East in points allowed, conceding 66.6 points per game. In the first meeting between the teams, Katherine Strong and Whitney Jennings combined for 41 points.

Overall, Creighton has a scoring margin of -1.5 points per game, placing them ninth out of ten Big East teams.

Butler’s next opponent if it wins its first game is dependent on a few outside forces. Xavier plays Providence in the first round. The winner of that game faces DePaul the next day, with the victor facing Butler in the semifinals.

In the program’s first four years under head coach Kurt Godlevske, Butler has advanced past the first round, despite averaging 10.3 wins per year. For the first time in those four seasons, Butler avoids the first round, starting the tournament in the quarterfinals.

Heading into the conference tournament, Butler is on the bubble of the NCAA Tournament, as one of ESPN’s Charlie Creme’s first four out.