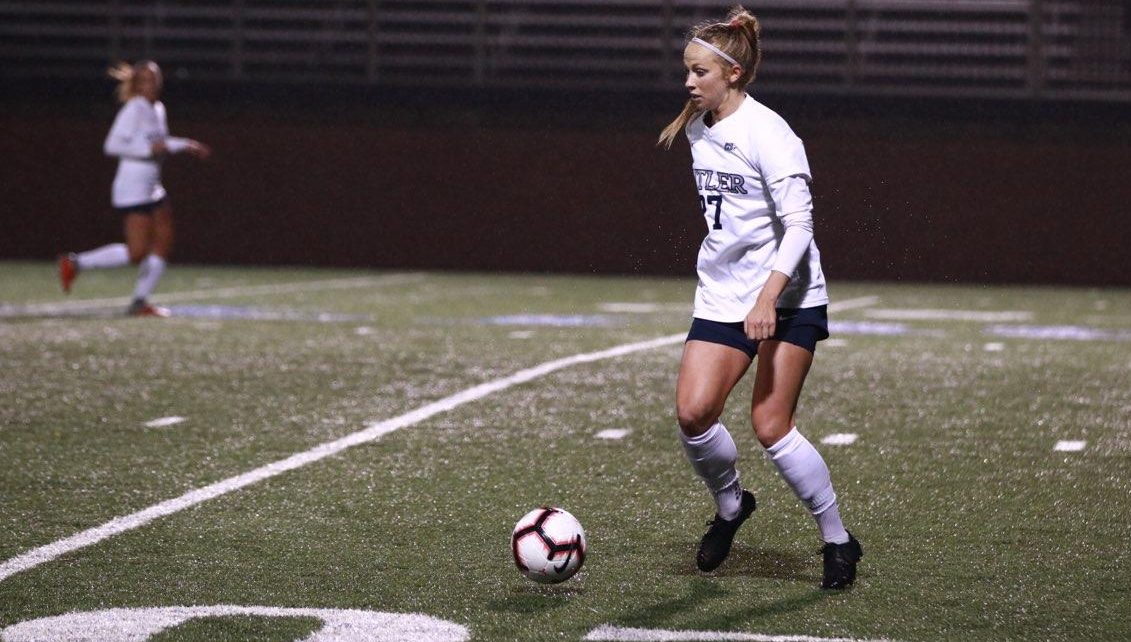 Annika Schmidt dribbles the ball up the field. Schmidt scored Butler’s second goal in the win over Providence. Photo by Jimmy Lafakis.

The No. 2 seed Butler women’s soccer team clinched a trip to the Big East Tournament final after knocking off No. 6 seed Providence, 3-2, on Nov. 1. The Bulldogs used a two-goal performance from senior forward Halle Stelbasky to seal the win over the Friars.

The performance from Stelbasky continues her recent scoring tear for the Bulldogs. Over the team’s last five matches, the forward has scored five goals during a stretch that has allowed her to grab the team lead with eight on the season.

“The thing about Halle is that she’s always been a goal scorer and we’ve asked her to do a lot of different things on the field other than scoring goals,” co-head coach Tari St. John said. “I think it’s just a senior fighting to stay alive and fighting to play more soccer.”

All three of the Bulldogs’ goals came in a similar fashion: a ball through the air after a cross from deep in the corner.

In the 19th minute, Paige Monaghan corralled a pass that was deflected by the Friars’ defense, leading to a near-side cross for the waiting Stelbasky. The forward netted her seventh goal of the season to give Butler a 1-0 lead.

Sixteen minutes later, sophomore defender Amanda Kowalski sent a cross in from the near corner that found redshirt junior defender Annika Schmidt for her second goal of the season. The header gave Butler a 2-0 lead at halftime.

It marked only the third time this season that the Bulldogs scored two goals or more in the opening half and the first time since Sept. 6 against Evansville. Butler led the first half shot count 10-5.

The Friars’ comeback bid did not come subtly as they ramped up the offensive pressure in the second half, leading the shot count 5-4. Providence broke through in the 59th minute when a through pass for Camille Murphy beat the back end of the Butler defense, resulting in a goal for the Friars to make it 3-1.

After a mini-surge from their opposition, the Bulldogs responded in the 80th minute with Stelbasky’s second goal of the game and eventual game-winner. The cross came from sophomore midfielder Katie Soderstrom on the far sideline to give Butler a 3-1 lead.

Here's a look at Stelbasky's eighth goal of the season and second of the match… pic.twitter.com/9lIqFQilde

The Friars’ goal in the 88th minute wouldn’t matter as the Bulldogs closed the door late in the match to seal the win.

For the second straight season, the Bulldogs will play Georgetown for the conference crown and an automatic bid to the NCAA tournament. The No. 1-seeded Hoyas defeated Xavier 3-1 earlier in the day to clinch their spot in the final.

With the Hoyas boasting the top seed in the conference, they will host the match, which is set to kick off at 1:05 p.m. on Nov. 4. The Hoyas defeated the Bulldogs 2-0 in D.C. on Oct. 21 in the regular season meeting between the teams.

After matching up with the Hoyas for the 2017 championship in D.C., St. John said familiarity will be the key for the Bulldogs.

“Last year we were traveling there for the championship game and at least a quarter of our team hadn’t been there before so I think that familiarity will help us,” St. John said. “I thought we played really well when we went there during the regular season but I think we’ll need a little bit more to come out with the win.”