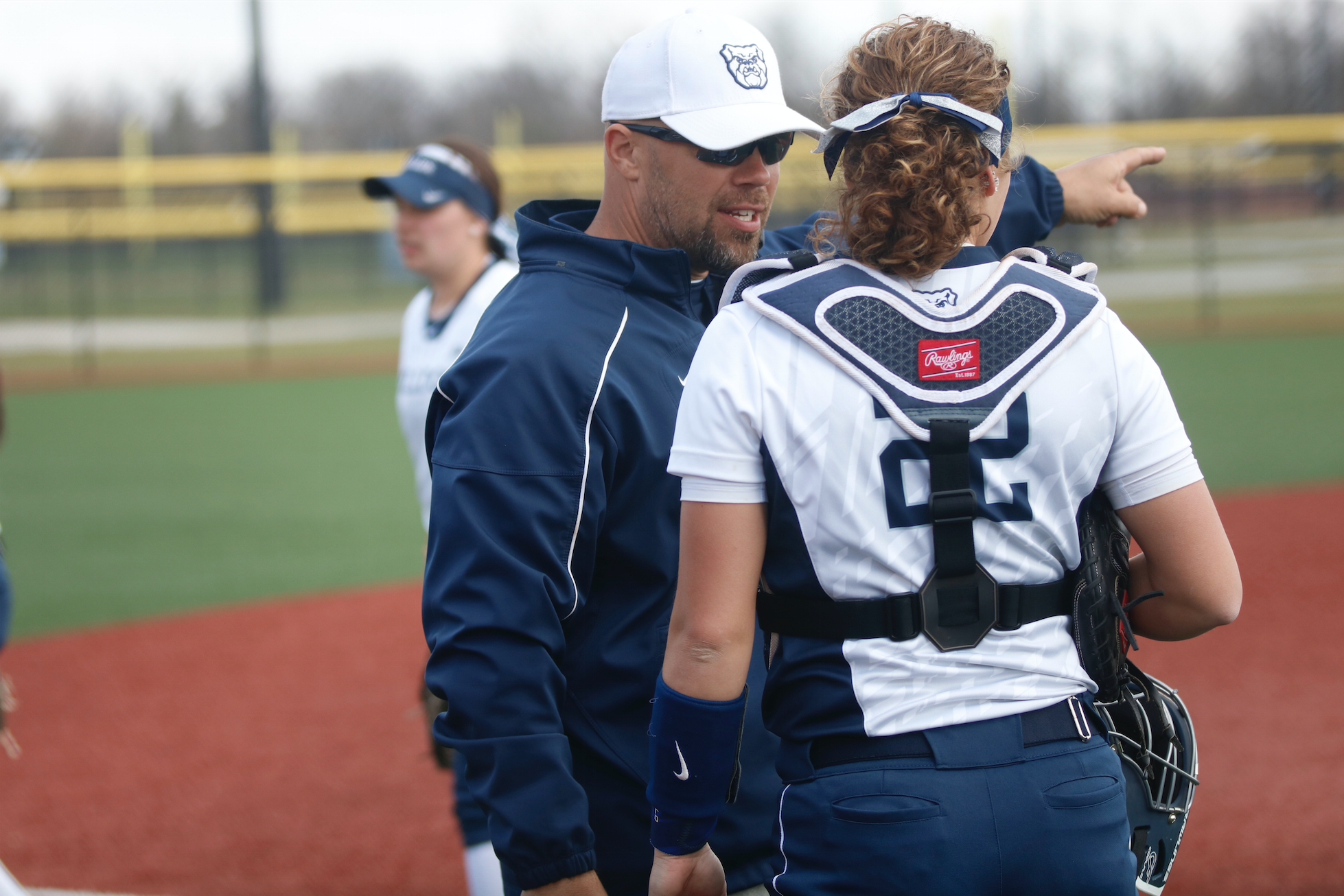 Head coach Scott Hall gestures towards the field in a meeting with catcher Cheyenne Thompson. Butler will play their first home game of the season on March 21 against Ball State University. Jimmy Lafakis/Collegian File photo.

The Butler University softball team went 3-4 in their annual spring break trip in Tampa, Florida, from March 14-18. The team is now 9-16 on the season.

After winning their first two games of the trip, the Bulldogs dropped four straight before finishing with a victory to close out the weekend.

Butler got on the scoreboard first with a solo home run from senior infielder Alyssa Lach in the bottom of the second inning. Lehigh scored a total of four runs in the next four innings to take a 4-1 lead into the seventh inning.

The Bulldogs responded with three runs in the bottom of the frame to force extra innings. Junior outfielder Jenna Foreman picked up two RBI on a single, and sophomore outfielder Alyssa Garcia followed it up with an RBI single of her own.

In the eighth inning, a single up in the middle by junior catcher Sammy Andersen scored senior outfielder Sarah Dixon to win the game for Butler.

Freshman pitcher Alyssa Graves made the start for Butler, tossing all eight innings while allowing three earned runs and striking out four batters.

In the second game of the day, Quinnipiac started the scoring first with two unearned runs in the bottom of the fourth inning, but Butler was quick to respond with five runs in the top of the fifth.

In the inning, Lach picked up an RBI single, sophomore infielder Christina Candotti picked up an RBI on a sacrifice fly, and Andersen reached on an error while bringing Dixon home to score.

Junior pitcher/infielder Kaitlin Doud threw all seven inning for the Bulldogs, allowing no earned runs while striking out three and walking two.

Butler jumped out to an early 1-0 lead in the second inning of their game against Maine thanks to an error, but the Black Bears scored five runs in the fifth inning for the victory.

Candotti had two of the Bulldogs’ six hits, and Graves allowed just one earned run over seven frames while striking out six and walking five.

Butler again jumped out to an early lead in the second game of the day, scoring two runs in the first inning on a sacrifice fly and fielder’s choice play.

Butler and Army swapped runs in the third and fourth innings, but Army scored one run in the fifth inning and two in both the sixth and seventh to take a 6-3 lead into the bottom of the seventh inning.

An RBI single from Foreman and RBI groundout from Garcia brought the Bulldogs within one, but Butler wasn’t able to complete the comeback, falling 6-5.

Graves relieves Schnaiter in the top of the 6th inning.

Butler scored four runs in the top of the first inning against St. Joseph’s, but the Hawks scored a run in the bottom of the first, two in the second, and one in the fifth to tie the score at four. St. Joseph’s added three runs in the sixth inning for the victory.

Doud had two RBI in the contest. Schnaiter allowed seven earned runs over six innings of work while striking out three batters.

In Butler’s final game of the day, North Florida pushed a single unearned run across the plate in the bottom of the eighth inning for a 1-0 victory.

We are in the 8th inning still scoreless!

Graves through all seven-plus innings for the Bulldogs, striking out five and walking four. Foreman, Lach, and Andersen all had Butler’s three hits in the contest.

On the final day of the weekend, Butler jumped out to an early 2-0 lead on a first inning base hit by Candotti. Florida A&M scored one run in the early innings, but the Bulldogs were able to hold on for the 2-1 victory.

The Bulldogs return to action with their first home game of the season on March 21 against Ball State University.