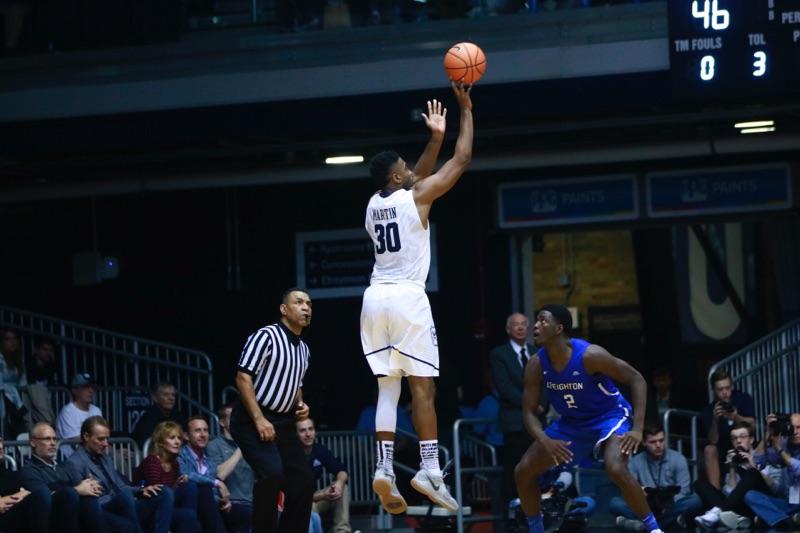 Kelan Martin rises up for a shot against Creighton. The senior finished with 26 points in his final game at Hinkle Fieldhouse. Photo by Jimmy Lafakis.

The Butler men’s basketball team sent off seniors Tyler Wideman and Kelan Martin on a positive note, defeating Creighton 93-70 on senior night. Butler came out ready to play and were in control for a large portion of the game. This team is firing on all cylinders once again. Here are three takeaways from a memorable night.

1. Where has this bench been all season?

Butler’s reserves had 25 points at halftime of this game. Through the first 20 minutes, the Bulldogs’ two leading scorers were bench players (Paul Jorgensen and Henry Baddley). This was a back-and-forth game until Jorgensen entered and promptly hit two 3-pointers and scored a quick eight points. Creighton’s bench contributed 31 points of their own, but when Butler’s finishes with 43, it doesn’t really matter.

When the Bulldogs get six different players posting at least eight points, they’re really hard to beat. Baddley and Jorgensen were a combined 6-of-8 from deep in this game, adding a whole new dimension to Butler’s offense. With Khyri Thomas guarding Martin, other players needed to step up and they absolutely answered the bell. If the Bulldogs can get anything close to this kind of bench production moving forward, watch out.

Most of these players were on the team last year when Seton Hall came into Hinkle on senior night and left victorious. They weren’t about to let it happen again. Martin and Wideman fittingly scored Butler’s first four points and the Bulldogs never looked back. The seniors set the example early and everyone else followed suit. This team came ready to play from the opening tip. The memory of last year almost certainly had something to do with that.

No matter who was on the floor, the level of energy and intensity phenomenal for the full 40 minutes. Creighton is an elite offensive team, so it was crucial Butler didn’t let off the gas for a single second. Martin and Wideman made sure they took absolutely nothing for granted in their final game inside Hinkle. Butler was locked in and simply wanted this game more than the Bluejays did.

3. The Bulldogs are probably playing for NCAA tournament seeding now.

With this win, Butler ensures they will go at least .500 in Big East play, which should be enough to get into the NCAA tournament. Another win would be nice but barring a disaster in the Big East tournament and a significant amount of bad luck, even a 9-9 record in the Big East means the Bulldogs will be dancing for a fourth straight season. It certainly hasn’t always been pretty, but they got the job done.

However, these final two games still have plenty of significance. Butler is in a battle with Creighton, Seton Hall and Providence for third place in the conference. In a league as good as the Big East, finishing in the top three is no small accomplishment. On top of that, Butler still has a chance to improve their resume to get a more favorable seed in the NCAA tournament. How the Bulldogs finish the regular season could very well move them up or down a seed or two. The work is not done quite yet.