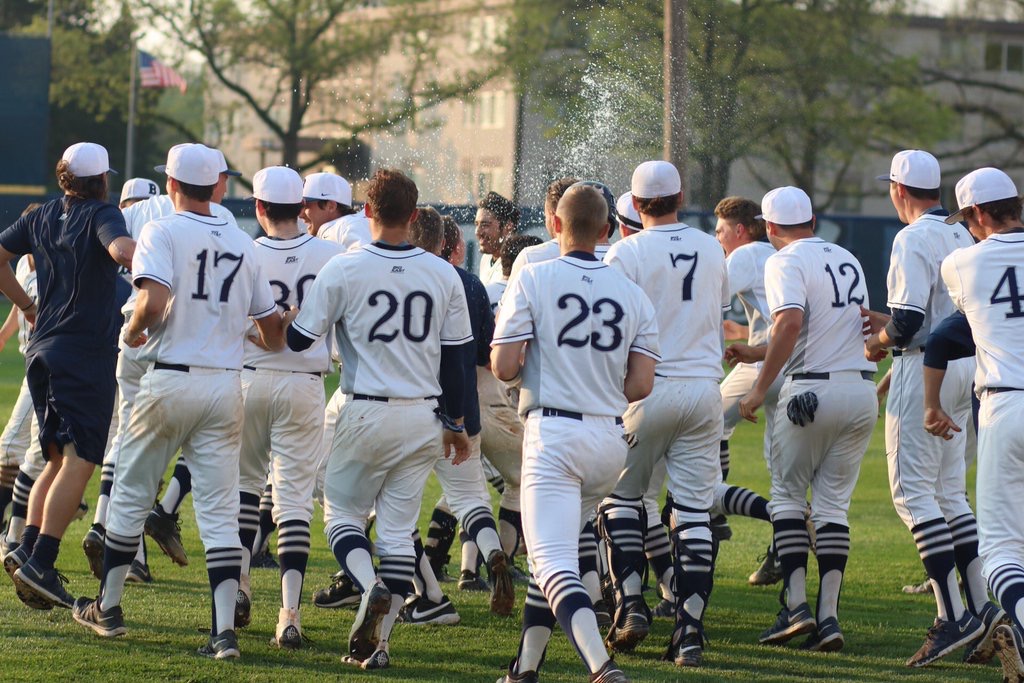 The team runs out to the field to celebrate. With wins over Lehigh, NC Wilmington and Eastern Kentucky, Butler baseball is 4-0 to start the season. Jimmy Lafakis/Collegian file photo.

The Butler baseball team opened the 2018 season with a four-game sweep in their first road trip in Wilmington, North Carolina. Offensive outbursts and solid pitching efforts enabled the Bulldogs to outscore their opponents 39-14.

Butler finished the weekend with a 4-0 record against Lehigh, NC Wilmington and Eastern Kentucky. The team played Lehigh on Feb. 16 and 17.

The Bulldogs opened their season with a gem by weekend starter Connor Mitchell. Mitchell earned the win as he hurled five innings, allowing one run on five hits. The bullpen kept the dominant trend going as they wouldn’t allow another run. Josh Walker tossed the sixth and seventh inning while Brock Balderson bridged the Bulldogs through the eighth and would hand the ball over to Landen Haney to shut it down in the ninth.

The offense had a coming out party against Mountain Hawk pitching. Garrett Christman began his season nicely by going 4-for-4 at the plate with three RBI and two runs scored. Harrison Freed managed to go 3-for-4 with four RBIs. Big East co-preseason player of the year Tyler Houston recorded an RBI, along with Zach Jarosz.

Christman earned the win as he tossed a solid six innings on two runs and just three hits. He also struck out seven. Christman’s only hiccup occured in the fifth inning when he gave up two solo-shots. The bullpen shut out the Seahawks behind the efforts of John McCauley, Kevin Napoleon and Jack Pilcher.

Tyler Houston and Christman would hit back-to-back doubles in the top of the first to give the Bulldogs an early lead. Houston finished the day 2-for-4 with two runs scored. Gehrig Parker went 2-for-4 with an RBI double and a lead-off blast in the top of the fourth to make the game 2-0. Zach Jarosz scored on an unearned run to make the score 4-0. The Bulldogs tacked on late as Houston scored the Bulldogs sixth run on a wild pitch in the seventh.

Dawgs take game 1 of the double header from @UNCWBaseball . They are now 2-0 to start the season!

The Bulldogs beat on the Lehigh Mountain Hawks for the second time in as many days.

Ryan Pepiot got the starting nod from head coach Dave Schrage, recording eight strikeouts over five innings pitched, and gave up three runs in five innings of work. Jack Myers came in for the sixth but only recorded two outs and gave up two runs. Quentin Miller would come into slam the door on the Mountain Hawk rally. Connor Schultz would finish the game out with a dazzling three inning performance. He recorded five strikeouts and only allowed one run on two hits.

Casual 6 run inning by the Bulldogs. Leading Lehigh 8-3 in the top of the 6th. Jack Myers on the mound in his first collegiate appearance. #TallDrinkOfWater #keepworking pic.twitter.com/oCVQ8w7GKn

The offense came out the gate in a 2-0 hole but would quickly respond as Harrison Freed smacked a two-run triple to right field in the bottom of the second. Lehigh would then tack on another run in the third but the Bulldogs would answer loudly in the bottom of the fifth and sixth as they notched back-to-back six-run innings. The fifth inning entailed a two-run triple by Tyler Houston, RBI singles from Gehrig Parker and James Gargano, and a sac fly by Garrett Christman.

The sixth inning included a leadoff double by Duncan Hewitt who would shortly score after Zach Jarosz poked an RBI single to left. Michael Hartnagel added an RBI double and the Bulldogs would bat around the order.

The Bulldogs tacked one more run on in the seventh as Tyler Houston singled and would cross home plate after Gehrig Parker knocked him in.

The Bulldogs earned a gritty come-from-behind victory in their final game of the road trip.

Butler found themselves in a 5-0 hole after a tough starting performance by Sam Hubbe. He pitched through four and two-thirds of an inning while allowing two earned runs. He was relieved by Quentin Miller with two outs in the top of the fifth. Miller would give up a run before getting out of the jam.

The offense would be shut down through the first five innings by Eastern Kentucky’s Kaven Brown, but the Bulldogs got to him in the bottom half of the sixth inning. Garrett Christman would scratch the first run across the board for the Bulldogs by hitting a sac-fly.

The big blow of the inning was brought by Harrison Freed’s bat. He shot a two-run double in left center, scoring Michael Hartnagel and James Gargano.

The Bulldogs would complete the comeback in the eighth after beginning the inning with back-to-back singles from Connor Doll and Gargano. A bunt attempt from Christman originally failed to advance the runners after Dall was tagged out at third, but an errant throw to first brought Gargano around the bases to score, However, Christman got caught in a rundown to leave the score at 5-4.

Next batter, Harrison Freed reached first on a fielder’s-choice. The Bulldogs had one on and two outs for redshirt freshman Zach Parker. He ripped a triple to right field which brought Freed home to nod the game up at 5-5.

The rally was officially completed when Zach Jarosz came through with a liner up the middle and into center field scoring Parker and giving the Bulldogs their first lead of the game.

Jack Pilcher put the Colonels to sleep with an easy ninth inning.