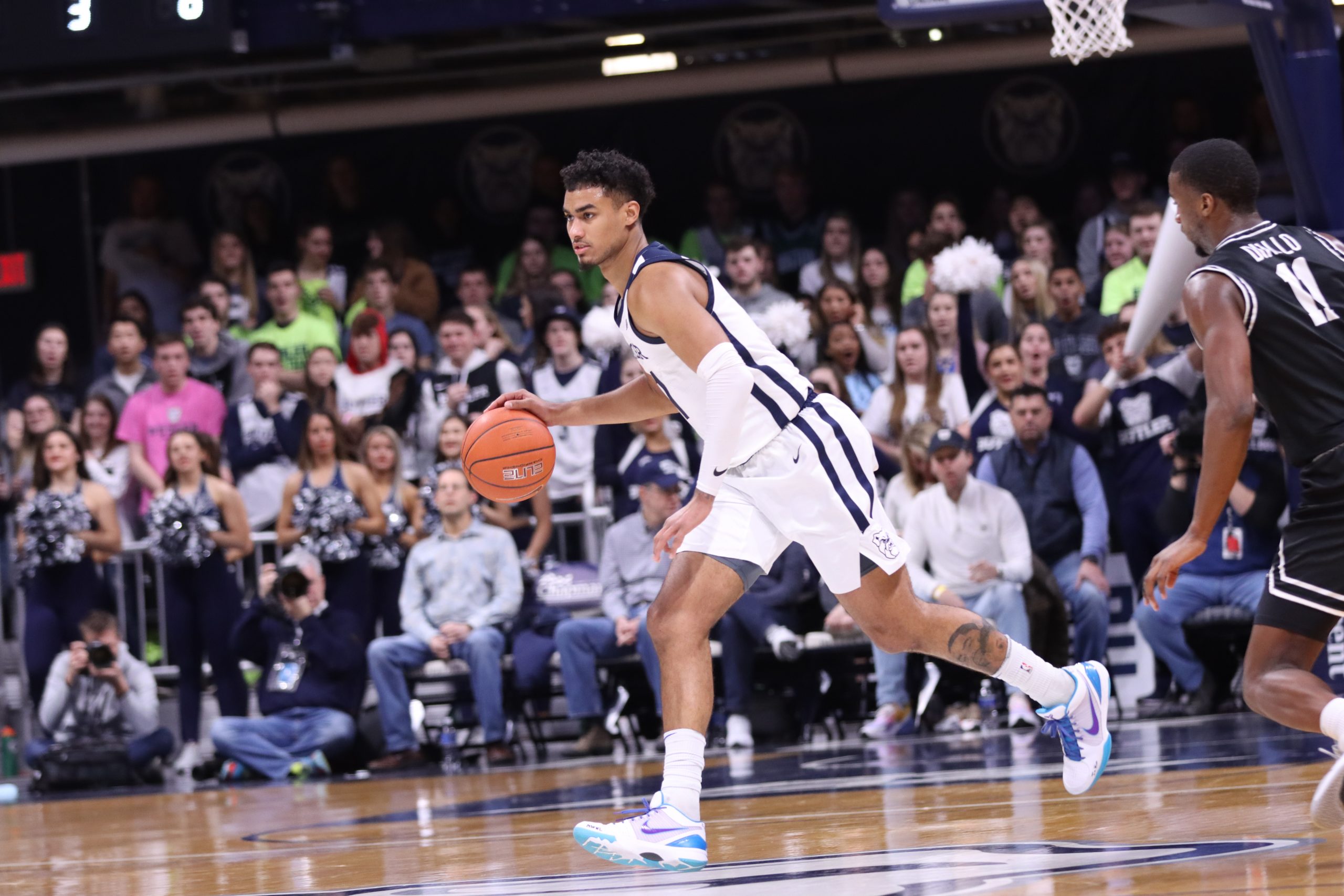 Halfway through conference play, the Butler men’s basketball team is 17-5 overall and 5-4 in the Big East. There has been a three-game winning streak, a three-game losing streak and an unfortunate set of injuries to Christian David and Aaron Thompson. This Wednesday, the Bulldogs begin the second half of conference play inside Hinkle Fieldhouse against Villanova. Despite just five turnovers as a team and defense that held the Wildcats to 37% shooting, the Bulldogs fell 76-61 at the Pavilion on Jan. 21.

Both teams are coming off home losses to teams that were outside of the AP Top 25. Here’s what you need to know as Butler tries to split the season series with the defending Big East regular season and tournament champions.

1. If Aaron Thompson doesn’t play, someone has to step up.

Aaron Thompson has missed three games. The Bulldogs are 2-1 in those three contests, but one thing is for sure: the margin of error is much smaller without Thompson in the lineup. Against Marquette, the Bulldogs got 31 points from Kamar Baldwin — 29 in the second half — and solid contributions off the bench from senior Henry Baddley in the form of an offensive boost and solid defense on Markus Howard.

After a less than inspiring first half at Georgetown, the Bulldogs had an offensive outburst led by Sean McDermott who tied a career-high mark with seven threes in the game. He finished with 25 points on 9-of-12 shooting and eight rebounds. McDermott provided the spark the Bulldogs needed to alleviate the pressure of Thompson’s absence.

The same can’t be said for what happened against Providence on Feb. 1. While the Bulldogs had all five starters scoring in double figures, there were no spectacular performances; only one bench point was scored and Butler went 1-of-14 from beyond the arc. All this to say, if Butler is going to be a top 10 team, someone has to step up to fill part of the void left by Thompson. Whether it’s Baddley and Khalif Battle off the bench, or Jordan Tucker and McDermott from beyond the arc, Butler needs extra production without Thompson on the floor. And it would be best if it didn’t have to come from Baldwin, who is being asked to run the offense and score at a high level.

Villanova is 7-2 in conference play. In their two Big East losses — to Marquette and Creighton — opponents’ starting guards are averaging 47.5 points. Marquette’s Markus Howard and Kobe McEwen combined for 51 points and shot 25 free throws. Creighton’s Mitch Ballock, Ty-Shon Alexander and Marcus Zegarowski combined for 44 points and shot 55.5% from beyond the arc.

Here’s the point: Villanova is a good, efficient offensive team at all levels, but they have holes on the defensive end and the main one comes at the guard position. Butler’s guards need to be aggressive and put pressure on Collin Gillespie and company to guard at a high level. The Wildcats have been most vulnerable against guards that play at a high level on the offensive end. Obviously, Baldwin is an elite offensive player and Thompson — if he plays — has a knack for putting pressure on opposing defenses in every way other than shooting. Khalif Battle will be an important piece off of the bench as an athletic, quick guard as well.

3. Butler must do a better job on the interior.

The last time these two teams played, Villanova dominated the interior. Jermaine Samuel and Jeremiah Robinson-Earl combined for 32 points and 21 rebounds, and the Wildcats won the rebounding and second-chance points battle. It’s the perimeter where Butler has an advantage on the offensive end, but on defense, it’s the interior where Butler needs to do a better job containing Villanova’s highly-skilled big men — something they’ve struggled to do at times this season.

Butler’s performance at the Pavilion in January didn’t get the job done inside Hinkle Fieldhouse, either. If Aaron Thompson plays, it will be close on Wednesday night. Without him? The Bulldogs will have a lot to make up for against the Wildcats.