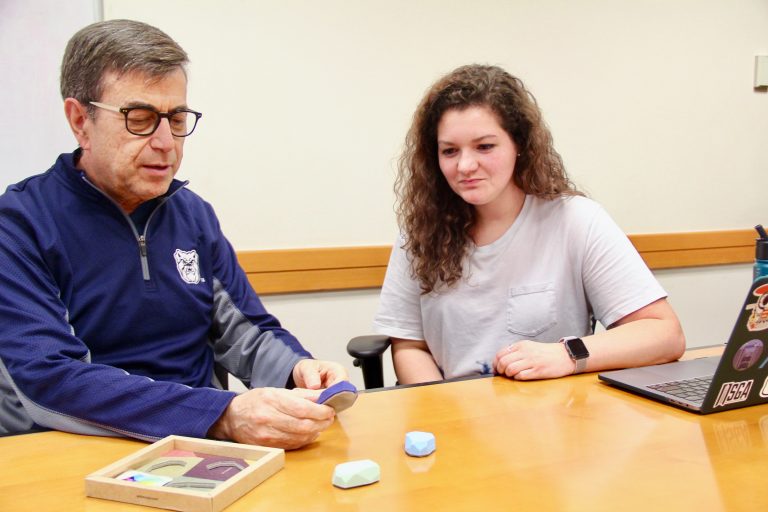 Linos works on the app with one of the student developers. Photo courtesy of Butler University.

Panos Linos, Butler University professor of computer science and software engineering, started developing GuideDawg 1.0 in 2015, an app to guide Indiana School for the Blind and Visually Impaired students around their building. Students at ISBVI and other campuses usually have to be accompanied by someone to navigate campus until they memorize their route.

Now, he’s working to bring it to Butler’s campus with the help of his senior students.

GuideDawg 2.0 is a mobile app designed to help blind or visually impaired students navigate their way around Butler’s campus. Not only will the app be customized for Butler’s campus, but for each student individually. Once a student has visited Student Disability Services, their schedule will be sent to the GuideDawg developers.

The developers hope that GuideDawg 2.0 will be up and running at the beginning of next school year.

The app will have data on all buildings, classrooms and walkways on campus— a feature similar to a GPS but more detailed. This way, a student can ask the GuideDawg 2.0 app for directions to an academic building and the app will verbally tell the student how to get there. GuideDawg 2.0 will be compatible for all types of smartphones, not just iPhones like the 1.0 version.

“These routes are going to be sent to us, and we will upload these routes to the app, and the app will send the blind students a notification that says, ‘Okay these are your routes, this is where you are going everyday. To go to class, the cafeteria, the library,’” Linos said. “So it would be very specific for our own students and the routes they need to take on a daily basis at Butler.”

Linos said the expansion of buildings and constant construction has been one of the team’s greatest obstacles. To combat this, they are using “iBeacon,” small, low-energy bluetooth devices that can be placed around construction sites. The devices will broadcast a signal to the GuideDawg 2.0 app, which will in turn tell students when they are near a construction site to reroute.

Ryan Graham, a senior computer science major, said the app will also need data on very specific parts of Butler’s campus. The process of collecting data on every building has been a time consuming effort. This includes locations of classrooms, departments, stairs and bathrooms.

“In the first version, a lot of things were hard set in the data and it wasn’t very big because it was just for the one building at ISBVI,” Graham said. “So that was just for that. This will hopefully encompass all of Butler’s campus, both inside and out, not only building by building, but classroom by classroom.”

GuideDawg 2.0 will be continually updated because of its connections to the cloud. Despite this improvement, the students developing GuideDawg 2.0 are still maneuvering their way around issues with voice-to-text translation and structural elements like stairs.

A $19,000 grant from the President’s Innovation Fund, created by President James Danko, funded the GuideDawg project.

Gabbi Forsythe, a senior software engineering major, joined the GuideDawg team this semester. She said she believes the app will be important to prospective blond students or when new students arrive on campus.

“Think about it right now,” Forsythe said, “they probably have to have someone take them around to their classrooms for the first couple of weeks until they can get that under their belt. It’ll just make their lives easier and give them some independence.”

Developers are currently working to get a small demonstration version of the app set up for February 2020.