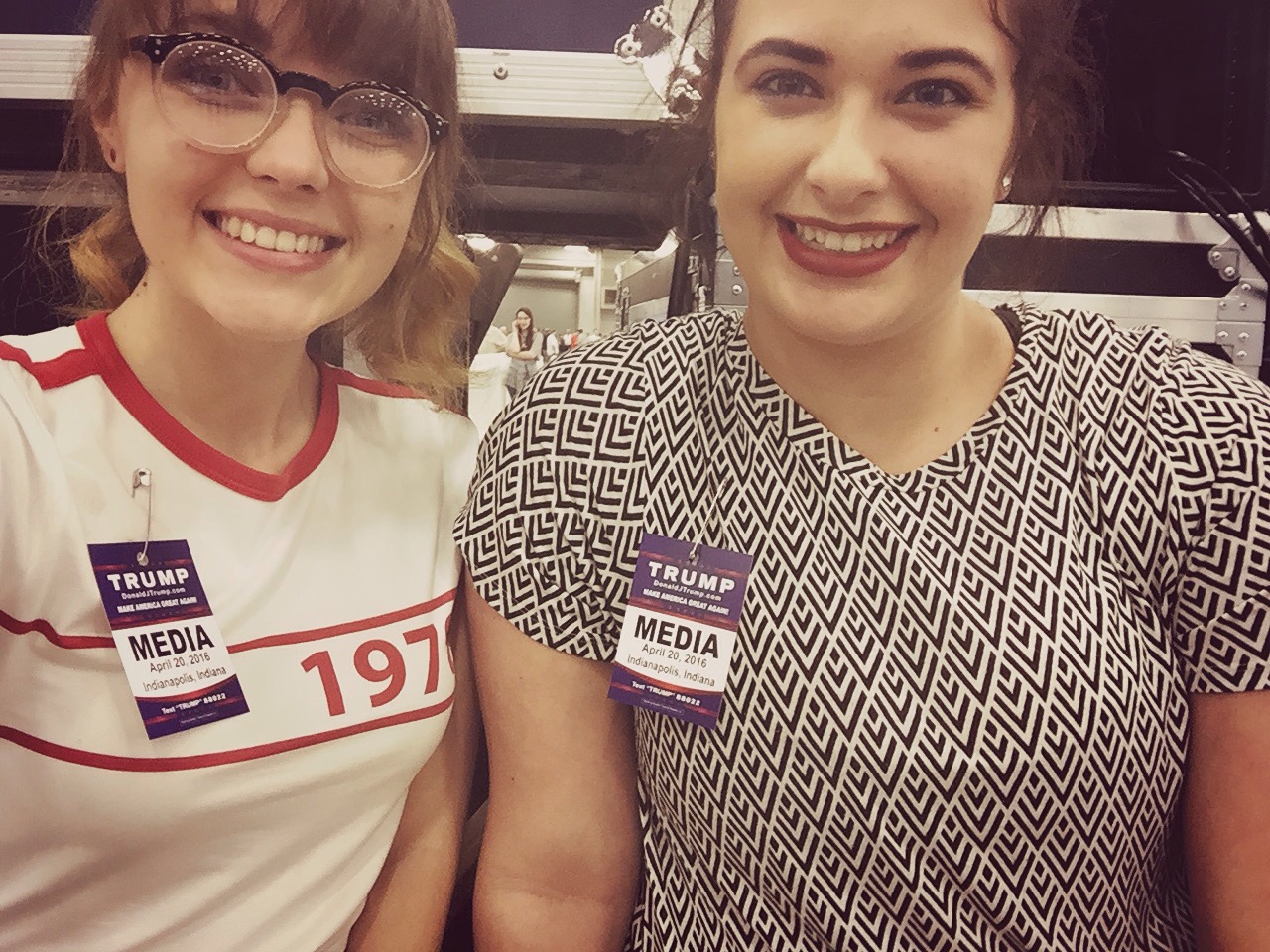 If you would have told me almost three years ago, when I took my first political science class,  I would attend a political rally, I would have scoffed, rolled my eyes and probably said something about not believing in party affiliation.

And if you told me the rally would be for Donald Trump, I would say, “The crude, TV show guy? He’s not even a politician, right?”

I was never very politically involved. Around the time I turned 18, the gay marriage debate was escalating, and I had always been a supporter of loving whoever you love. A couple of important people in my life who are gay were directly affected, and this sparked my initial interest in politics.

Once I entered college, I explored more issues—issues I always had some sort of opinion on but did not necessarily connect with politics. I advocated for LGBT+ rights, explained why I am pro-choice and how I disliked the general idea of gun control. Rumors of 2016 presidential candidates were circling the web, so I investigated.

And now—as I recall the debates and rally coverage I have seen—I have no idea who I want to vote for. I do not look at the party. I choose to support the person, not the corrupt, concocted party someone represents.

I have no clue who I want. I just know that I do not want Donald Trump.

I am that family member who brings up politics at family gatherings and makes the rest of the dinner extremely awkward. I have lectured my 11-year-old brother on the dangers of Donald Trump on a few occasions.

So, why would I even go to a Trump rally? Great question.

When my roommate proposed we go—and later texted me she applied for media passes—I was unsure if I even wanted to attend. I knew how I felt about Trump. I knew what he was about. I knew what his supporters were about.

But I didn’t know why his supporters backed him. I didn’t understand. So, out of curiosity we jumped into the car and headed to the rally at 1:30 p.m. on Wednesday.

We were a little over an hour early and as we approached the Indiana State Fairgrounds, I started to feel nervous. I had never been to a rally before and I was not sure what to expect. I was anxious because, as my roommate put it, “Wow. Trump supporters are actually real.”

Of course, I have seen the polls and news coverage and various posts scouring the internet in support of Trump. But seeing all of the cars filing in and people selling the infamous red cap on the streets, it hit me just how large the phenomenon really was. I probably pass by countless Trump supporters every day.

We continued through the gate 6, past the supporters and even some protesters with clever signs. We walked into media check-in—not before getting lost and talking to someone who I am convinced was from the FBI. We took our place in the media center, just in front of the platform of cameras, and we began to observe.

Trump was not coming out until 3 p.m.—which actually ended up being 3:30—so, we took notes on the people and interactions. We listened to the speakers who came out to talk Trump up.

And with the start of 2 Unlimited’s “Get Ready for This”—an intro/exit music choice I will say I was a fan of—Trump approached the podium. Arms and signs flew up. Chants encompassed the room.

He started talking about “Lying Ted” and “Crooked Hillary.” We tried to tally how many times he mentioned China and the wall, but we lost count.

Price (left) with columnist Jenna Voris at the rally just before Donald Trump told the audience, “People in the media are some of the most dishonest people you will ever meet.”
Photo courtesy of Alexis Price

As I took a break from scrawling quotes in my notepad, I looked up to see the people—still chanting, still pumping signs up and down. See, I had been looking at this campaign all wrong. I spent the majority of the time shooting down the belief that so many people genuinely supported him; and for those who did, I automatically assumed they were all ignorant, racist or full of bigotry.

But in reality, people are just afraid.

He taps into some of our nation’s biggest fears. He addresses how we need to change things like the Trans-Pacific Partnership and illegal immigrants. While he does not pose many possible solutions to those things—other than building a $10 million wall—he uses emotionally charged fears to pull in his audience.

He is somehow personable, and I think that comes with not being a politician—another reason he appeals to the average citizen.

By the 2008 election, America was in great turmoil after George W. Bush’s presidency. People sought a change of pace; and that is when the majority elected Barack Obama—someone the polar opposite, someone affiliated with a different political party. And I think that is largely what we see now.

There are many people who want something different. And which candidate is the opposite of Democrat Barack Obama? Republican candidate Donald Trump.

People are angry about Obamacare. So, at his rally Trump adds to his conclusion, “I want to take Obamacare and replace it with something so much better!” And in the midst of all of the shouting and clapping and sign waving, I think some people forgot to ask what this thing that was “so much better” would be.

I didn’t come away from this with any sort of new feelings about Trump.

There were times I laughed. There were times a rolled my eyes—13 times, according to my eye roll tally I kept in the back of my notebook. There were times when the crowd started chanting things like “build that wall” and my insides curdled. But as I stood there with just my media pass, tiny notepad and my  partner-in-politics, listening to his kind of cool exit song, I couldn’t have been more satisfied with my decision to go.

Seventeen-year-old Alexis would have said this was crazy; that there was no point to attend a rally of someone I could barely stomach.

But the point was not to understand Trump anymore. It was to see whether or not the real Trump was the one we see in the media. It was to explore things unfamiliar or uncomfortable. It was to keep an open mind.

It was to understand the people—even if you have highly differing opinions.

And with Indiana primaries right around the corner on May 3, it might be best that we all start trying to understand each other.

Y’all ready for this?