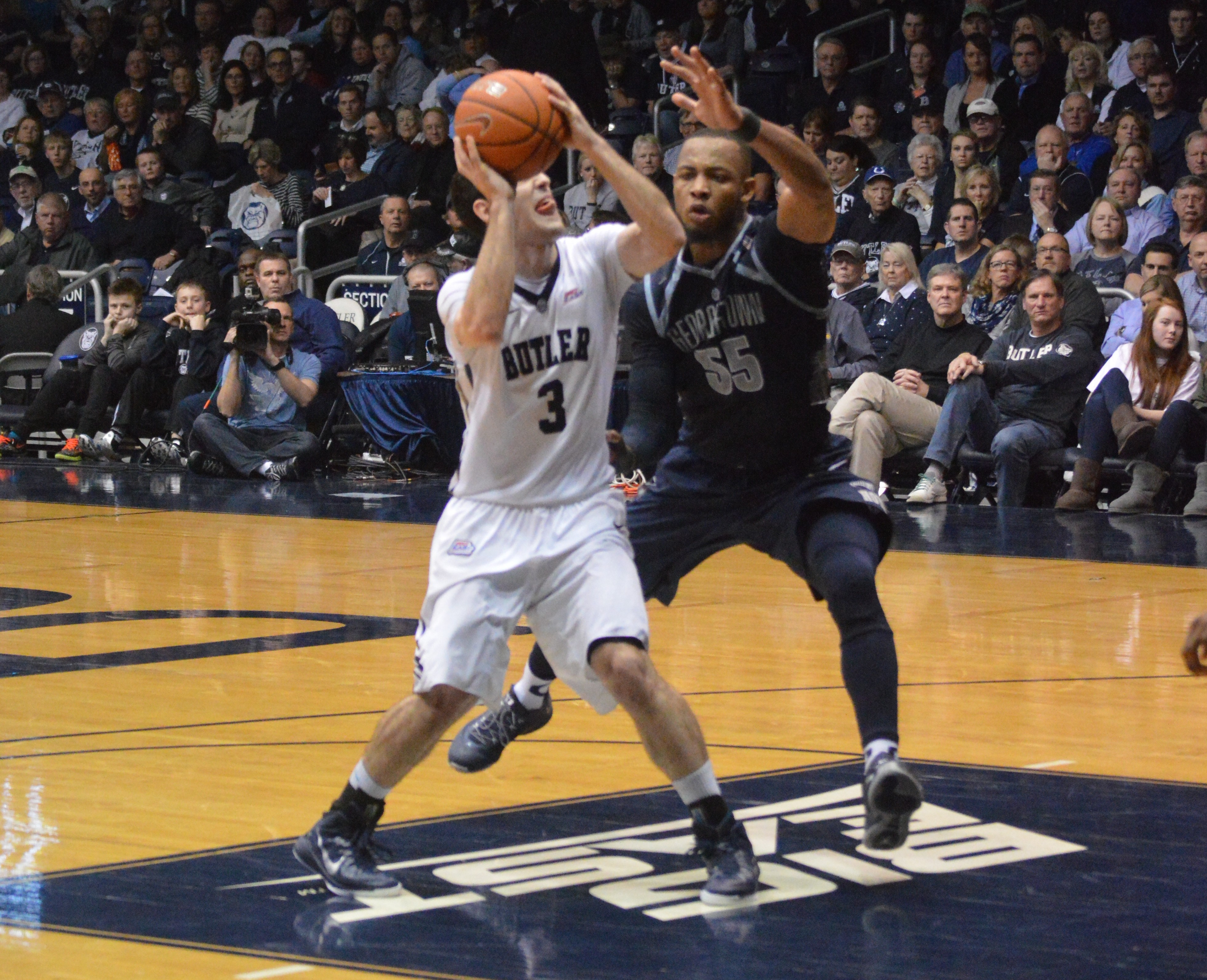 Although nine months have passed since he played his last game in a Butler uniform, Alex Barlow‘s name is still frequently uttered throughout Hinkle Fieldhouse and Butler University’s campus. Recently, Barlow has moved up to the NBA level, working as a video assistant with the Boston Celtics under his former coach and mentor Brad Stevens.

As a video assistant Barlow’s duties include breaking down opponents game film, relaying information to the coaches, filming and sometimes stepping into drills at practice. On game days, Barlow spends his time in the locker room coding and studying the game to relay information to the rest of the coaching staff.

Barlow chose to attend Butler to have the chance to learn under Stevens. It was also a factor in his decision to go to Boston.

“You could argue that Coach Stevens is the best basketball coach in the world, and just being around him influences me,” Barlow said.

Barlow also admires Stevens’ honesty and devotion to his players as well as the approach he takes to get to know his players off the court.

“Coach Stevens is as good as they come, especially off the court,” Barlow said. “He is always trying to get better. Whether he wins by 30 or loses by 30 he always takes the same attitude to try and improve.”

In his time at Butler, Barlow played in 4 NCAA tournament games and received a slew of awards for his work on and off the court including Big East scholar-athlete of the year and the 2015 Big East Sportsmanship award. Despite dreams of coaching, Barlow still does not know what the future has in store from him.

“When I was younger I thought I would end up as a coach in college basketball but now being in the NBA now, I could envision myself being here and never leaving,” he said.

The jump from college to the NBA is considered significant and Barlow cited the popularity of the players as the biggest difference.

“NBA players are known around the globe, they are celebrities in the US and even overseas. In college, players can be considered celebrities, but for the most part it’s only on their campus,” Barlow said.

Kellen Dunham, a former teammate and current Butler senior, said that losing Barlow on the court definitely made an impact.

“We’re going to miss his game planning and his inspiration, how hard he plays, and his approach,” Dunham said. “He is constantly finding new ways to look at the game, and I always admired that about him. He sees the game in a different light.”

Current Butler head coach Chris Holtmann coached Barlow for two seasons after the departure of Brad Stevens. Holtmann believes Barlow indeed has the skills necessary for a career in coaching.

Many former players or young basketball enthusiasts who aspire to become coaches in college or in the NBA have a long journey to achieve their goals. It takes time, hard work, and many other skills. Despite the difficulty of this journey, Barlow’s peers believe he is ready to face it head on.

Holtmann said Barlow’s work ethic will help him most.

Dunham said he believes his unique view of the game and his passion will help him most.

“His constant hunger for knowledge and creativity, his drive in general will help him get to where he wants to be,” Dunham said.

When asked where he could see himself coaching in the future, Barlow named two of his favorite schools.

“I want to end up as a head coach somewhere, if I did go back to the college level I would love to end up at a school like Dayton or Butler, because they are close to my heart,” said Barlow.

For now Barlow is focused on helping the Boston Celtics raise their 18th banner.

“Hopefully we can make some good strides going forward, and we’re definitely in good hands with Coach Stevens and everyone in the front office,” he said. “I think we can have success here real soon.”