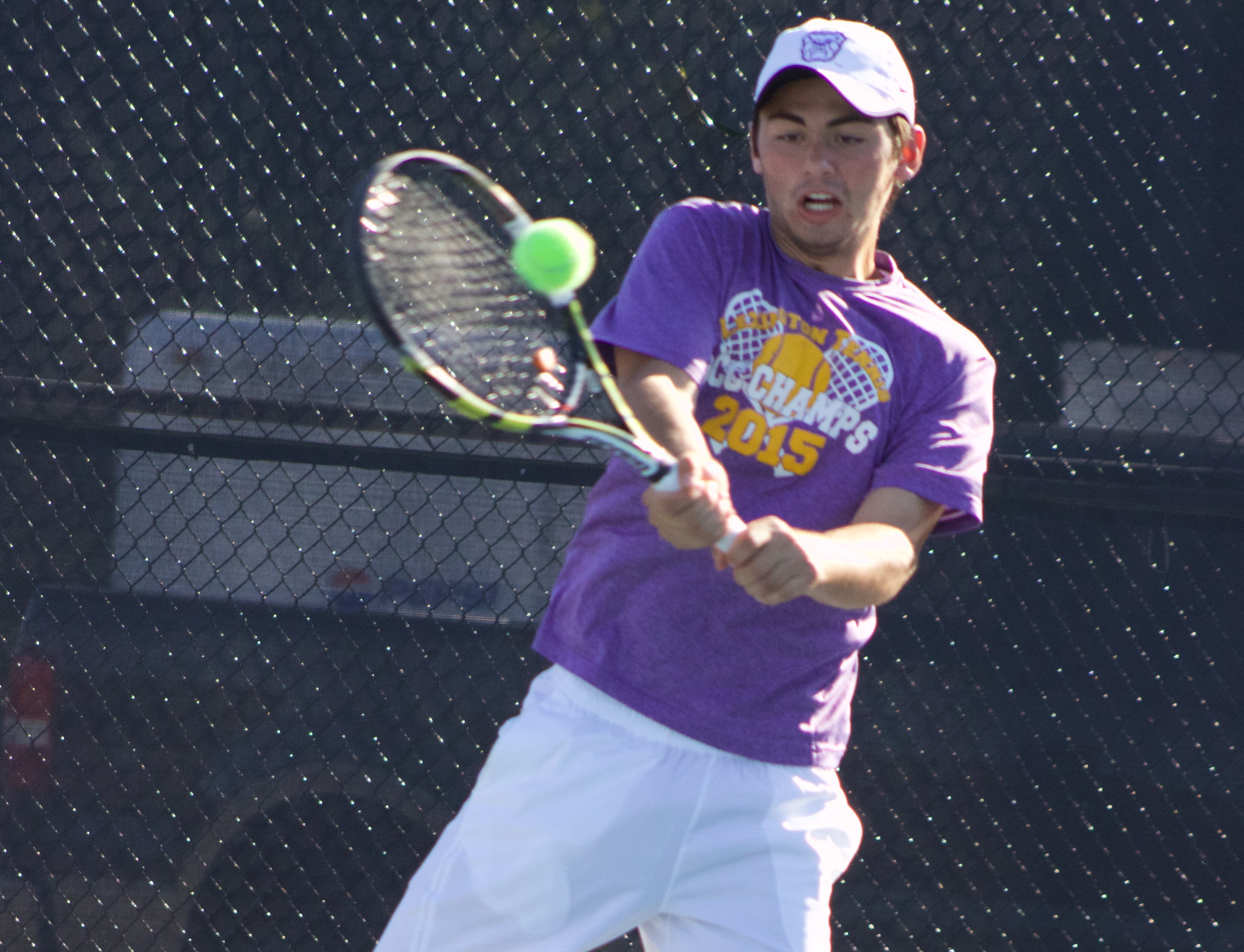 Mason Dragos did not think he would be able play tennis ever again, let alone play here at Butler University this year. But after 30 hours in the hospital, one surgery and months of working to regain his strength, Dragos is back to playing tennis after being accidentally shot.

It was March 14, what was supposed to be a normal Saturday afternoon for Dragos.

“I was at a local establishment from around where I lived, and I was around a few workers,” Dragos said. “One accidentally misfired a gun into the countertop.”

The bullet hit the countertop and sprayed fragments into Dragos’s hand, arm and chest, one centimeter away from his heart.

“When it happened, my hand looked like it went through a meat grinder,” Dragos said. “But I didn’t faint or anything, so that was good.”

Dragos spent 30 hours in the hospital and had his hand stitched up. It was only after he had gotten home that Butler men’s tennis head coach Parker Ross was informed of the incident.

“My initial reaction was shock, and I was very surprised,” Ross said. “I thought he was in a car accident or goofing around and broke something.”

Dragos tried to play again three weeks after the accident. After being unsuccessful, he decided to have surgery to remove granite fragments still remaining in his left ring finger.

“I was worried about the surgery because it was in his dominant hand,” Ross said.

“I still don’t have feeling in this finger [after the surgery],” Dragos said. “I’m kind of used to it now, but it’s still weird to hit with.”

A month and a half after the accident, Dragos started playing competitively again. Shortly after that, Dragos defied all the odds stacked against him and won the Ohio men’s singles state championship.

“In my semifinal match at state, I was losing pretty badly,” Dragos said. “The crowd just brought me back up, and I won that match.”

He easily won his championship match 6-3, 6-2 to become the first male in his high school’s tennis history to win a state title.

“I couldn’t believe it for awhile,” Dragos said. “It probably took me a few months before I really realized that I won. It was one of those things that I always wanted to do, and I figured when everything happened, I threw that whole thing out of my head because I just wanted to be able to play again.”

Upon hearing about his state championship win, Ross was not surprised.

“His toughest match was in the semifinals,” Ross said. “So once he made it to the finals, I knew he was going to win.

“He wasn’t going to let a severe accident like that keep him from succeeding.”

Ross had been recruiting Dragos all throughout his high school career. Ross knew he had a lot of talent, but was not sure about recruiting him until finally they met.

“When I got to know him as a person, I knew I was going to do whatever it took to get him to Butler, and I haven’t regretted it,” Ross said.

The transition to Butler has been a smooth one for Dragos, having nothing but nice things to say about the school and community.

Since arriving to Butler’s campus this fall, Dragos said he is ready to start competing again. He said he looks forward to playing Ohio State this season the most, since it is so close to his home town.

“We’ve just been playing a lot and lifting in the mornings,” Dragos said. “I mean, I feel way stronger than I ever have in my tennis career.”

Also after arriving to Butler, Dragos got to know his roommate and fellow teammate, Adrian Mag. Like most people, Mag was also shocked to hear about his roommate’s accident.

“I was really surprised, and it caught me really off guard,” Mag said. “Because you don’t hear about things like that ever, especially not in collegiate athletes. It was just a freak accident and I’m glad he’s out here able to be playing.”

“He’s been a really good teammate. He’s a really fun guy to play with on the court.”

Mag was also able to give a little insight to Dragos off the court, including a very interesting eating habit.

“He loves this off-brand of barbecue chips,” Mag said. “Like he eats a lot of bags per week. There called Clancy’s, and you can only buy them at Aldi’s, apparently. They’re delicious, I will admit, but I had never heard of them before in my entire life.”

Mag is also looking forward to this season and ready to get back on the court.

“I’m just getting off an injury right now,” Mag said. “I’m honestly just looking forward to every single match I can play. I think the team chemistry is solid, and I think we have a lot to offer this year.”

Dragos and Mag both showed success in the team’s fall opener in Valparaiso, Indiana. Dragos had wins in both No. 1 singles and doubles and No. 4 doubles while Mag had a win at No. 2 doubles.

After winning the state championship and coming to Butler University, Dragos has a lot to be proud of. But he has learned a great deal as well.

“Never give up, and just try to find that extra gear to push on a little bit,” Dragos said. “You could do pretty big things in life.”

“I think that he’s going to be one of the best players on the team,” Ross said. “I think he can be very, very good and possibly even nationally ranked. He has no ceiling to his potential. He could end up being better than I even think.”