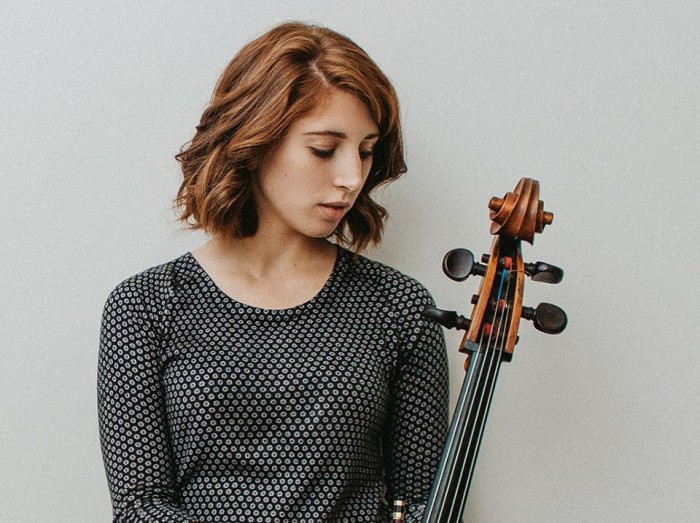 She was born into a musical family and grew up around the sounds of the piano, violin and cello.

Glorioso-Wible started playing piano when she was just 3 years old.

“I remember there was a day in church when I saw an older girl playing cello, and I just fell in love with it,” Glorioso-Wible said.

Her love for music was inherited from her parents.

“My parents met on Mackinaw Island,” she said. “My dad was the drummer in a jazz band that used to play for all of the Grand Hotel dinners. My mom was working on the island, and she auditioned to be in their band.”

“My dad was actually the only one of the band members that voted her out,” she said. “He didn’t want her in, but they ended up getting engaged a few months later!”

To this day, Mackinaw Island holds a special place in the girl’s heart.

“My husband and I went back there for our honeymoon,” she said. “It has always been a family place.”

“As a senior in high school, I thought I was going to do music journalism, so I started out as a double major in music and English,” she said.

Eventually, her training got more intense, and she realized she needed to narrow things down.

Glorioso will perform on April 10 at 8:00 p.m. in Eidson-Duckwall Recital Hall

“I wasn’t going to be able to do two things,” Glorioso-Wible said. “Cello started taking over my life.”

But as a music major, Glorioso-Wible feels that time management is her biggest struggle.

“It feels a little bit like you jump into the professional world before other people do,” she said. “You’re teaching lessons, playing gigs, and giving recitals before you have even graduated.”

On the flip side, the professional experience has helped Glorioso-Wible realize what she really wants to do with her music career.

“In the past couple months, I’ve realized I’m not sure I want to be in a professional orchestra,” Glorioso-Wible said. “I think I would like to have a touring chamber ensemble where you get to work one-on-one with people. In order to support myself, I would like to also start a private teaching studio.”

Glorioso-Wible’s recital has pushed her to perform in front of her peers and become more comfortable onstage.

“With my music, I have tried to bring a lot of people in my practice room,” Glorioso-Wible said. “The big battle of performing is you get the performance anxiety, and that changes everything you have prepared.”

Glorioso-Wible has worked to train herself to play confidently in front of others.

Addie Funderburg, the violist in Glorioso-Wible’s quartet, sees her on a daily basis.

“Ellie is one of the most hardworking, caring, encouraging, and driven people that I know,” Funderburg said. “I love her enthusiasm and energetic attitude towards music, and I can’t wait to see what the future holds for her!”

Glorioso-Wible will play the Third Suite by Bach for unaccompanied cello, the slow movement of Chopin’s Cello and Piano Sonata, and the Haydn Cello Concerto in C major.

Her recital will take place April 10 at 8:00 p.m. in Eidson-Duckwall Recital Hall.